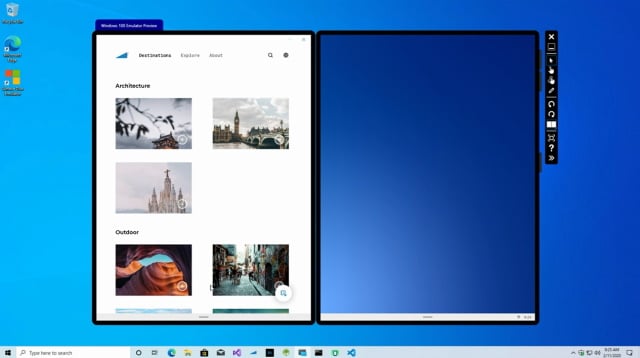 It has been a few weeks since we first had the chance to play around with Windows 10X thanks to Microsoft's emulator and image for the operating system. Now the company has released Microsoft Emulator v1.1.54.0 and the Windows 10X Emulator Image 10.0.19578.0.

There is quite a bit to explore in the new Windows 10X image, including a beta version of the File Manager app. There are also early tastes of the ability to run Win32 software in the operating system on dual-screen devices.

The new release sees Microsoft updating the EULA for the Windows 10X Emulator, dropping the requirement for the software to be installed on a Windows Insider computer. The new File Manager app works in conjunction with OneDrive, so you'll have to sign into a Microsoft account to use it.

The update also includes changes to the Win32 container which will give developers the chance to get their software ready for switching between single- and dual-screen modes. Microsoft says:

This update applies the windowing model for Windows 10X to your Win32 apps running in the container. System-defined window placement ensures that users have a consistent and simplified windowing experience that is tailored and appropriate to a smaller, dual-screen, and touch-friendly device. Some gaps remain and will be addressed in future updates.

Microsoft has published release notes that detail everything that's new in the emulator and image:

You can download the Microsoft Emulator and the Windows 10X Emulator Image free of charge from Microsoft.