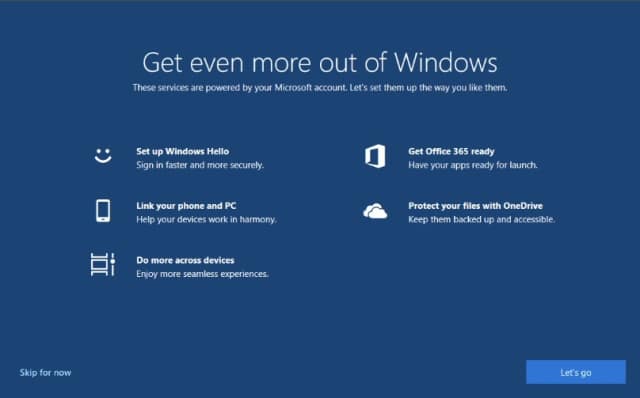 Microsoft is no stranger to using nag screens to annoy Windows 10 users, and now the company is back to its old tricks again. After installing the latest batch of update for the operating system, users are being confronted with a full-screen "Get even more out of Windows" message.

The nag screen encourages users to investigate other Microsoft products such as Your Phone, Windows Hello, Office 365 and OneDrive. It's part of what Microsoft describes as "post-upgrade setup".

In many ways, the nag screen resembles Microsoft's onboarding "experience" that is display when running Windows 10 for the first time. But now it seems that the screen is appearing after people have installed the February and March updates for Windows 10, as Windows Latest notes.

The screen sees Microsoft inviting users to "get even more out of Windows", with the company going on to say: "These services are powered by your Microsoft account. Let's set them up the way you like them". Specifically, users are invited to "Set up Windows Hello", "Link your phone and PC", "Do more across devices", "Get Office 365 ready", and "Protect your files with OneDrive".

The nag screen is clearly an attempt by Microsoft to push more people towards using the other tools and services it offers. While there is a "Skip for now" option, the wording of this implies that pestering could resume in the future. It is also far less prominent than the blatant "Let's go" button.

But all is not lost. You can prevent this nag screen from being displayed using the following steps: