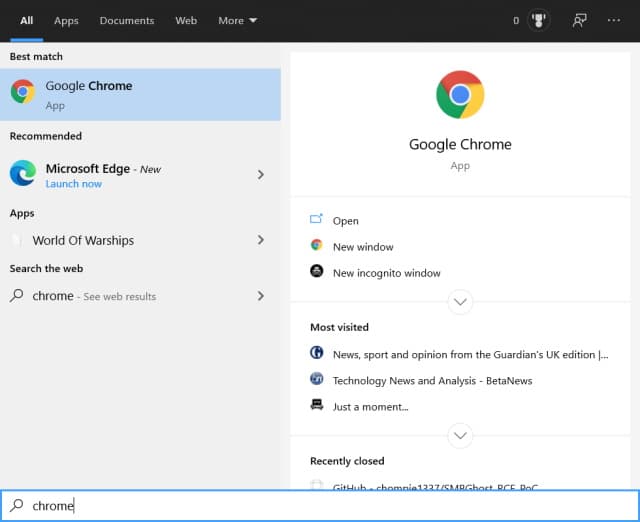 Microsoft is certainly no stranger to using Windows 10 to promote its own software; there have been numerous instances of the company advertising products within the operating system.

Now, if you use the Start menu to search for a web browser such as Firefox or Chrome, you'll see an ad recommending Microsoft Edge. While with previous in-Windows ads there have been simple steps you can take to avoid or disable them, this time around it seems there is nothing you can do about it.

The latest ad drive comes just after Microsoft started to push out the Chromium-based version of Edge to all Windows 10 users. The company has also recently started to promote Edge to people using the OneDrive website. But with ads within Windows 10 itself having already proved controversial, it is a little -- although perhaps not entirely -- surprising to find Microsoft up to its old tricks again.

The ad for Microsoft Edge appears below search results in the Start menu under a Recommended heading. If you already have the new, Chromium-based version of Edge installed, there is a link to launch it; if you don't yet have it, you'll see a link to download it. As noted by Bleeping Computer the ad is triggered if you search for Chrome, Firefox, Safari, Opera or the word "internet".

Sadly, it would appear that there is nothing that can be done to stop this ad from being displayed -- short of stopping searching for browsers via the Start menu. Over on BornCity, Günter Born shares a tip from Deskmodder.de about editing the registry which it is claimed stops the ads in their tracks. You can try creating a DWORD (32-bit) Value called DisableSearchBoxSuggestions with its value set to 1 under HKEY_CURRENT_USER \ SOFTWARE \ Policies \ Microsoft \ Windows \ Explorer (or edit the value if you find it already exists).

Sadly, in our tests -- and in the tests of commenters -- this tip does not seem to stop the Edge ad from appearing.