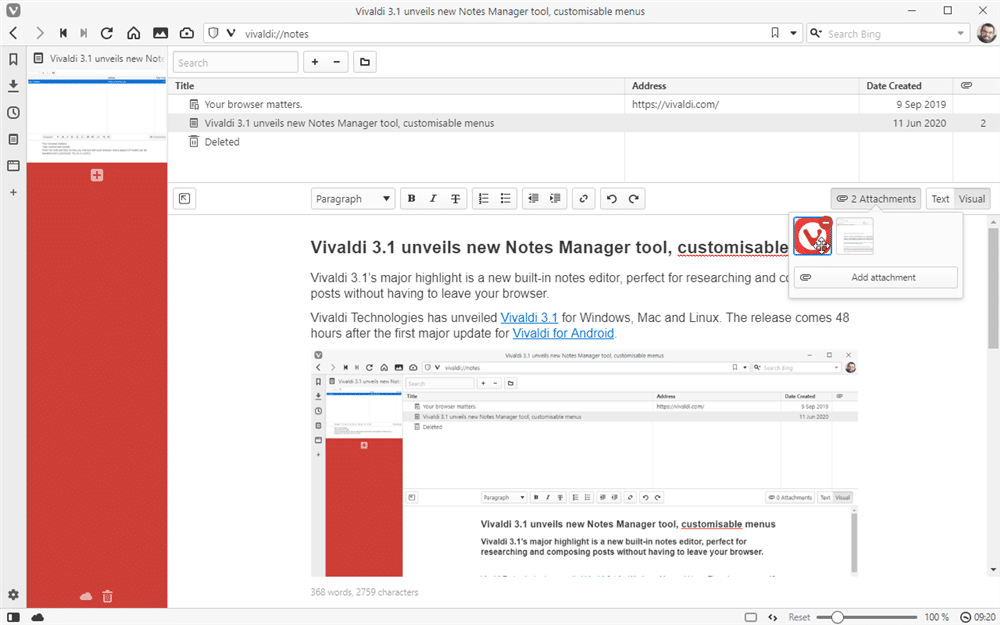 Vivaldi Technologies has unveiled Vivaldi 3.1 for Windows, Mac and Linux. The release comes 48 hours after the first major update for Vivaldi for Android.

The desktop build unveils a major upgrade to its existing Notes feature in the form of a full-blown Notes Manager tool. The tool is now accessible via its own full-screen tab in the main browser window (click the link in the Start page or type vivaldi://notes/ into the browser’s address bar).

Previously, Notes supported the markdown syntax, screenshot attachments and web links, but was better suited to shorter notes. Notes Manager extends this feature set with the addition of a visual WYSIWYG editor, complete with text formatting toolbar, making it suitable for recording much larger documents.

The editor now supports find (Ctrl + F) and undo/redo (Ctrl + Z/Y) functions, plus provides a character and word count. Notes can be synced between devices -- protected by end-to-end encryption -- via the user’s Vivaldi account.

Vivaldi has always prided itself on the browser’s flexibility, and version 3.1 sees that extended with the addition of configurable menus. Customized via 'Settings > Appearance > Menu', users can now rearrange items plus add and remove options from the menus as required.

The update is rounded off with the promise of "significant speed enhancements", including faster start times and better management of multiple tabs.

The desktop update follows 48 hours on from the official release of Vivaldi 3.1 for Android, the first major update since the mobile browser made its official entrance. Users gain the ability to set a dark theme for web content as well as the user interface. Otherwise it’s a case of bug-fixing and under-the-hood tweaks.

Users can download Vivaldi 3.1 for Windows 32-bit and 64-bit, Mac and Linux. Vivaldi for Android 3.1 is also available for mobile devices running Android 5.0 or later.