We see the European market today as the hottest area of the global cloud in a pivotal moment. While US cloud giants battle for world domination, China is building its "Great Cloud," Russia is testing its sovereign internet, and Europe is busy creating its own digital sovereignty.

The EU recently declared a massive digital transformation for its economy in the next decade where cloud and AI technologies will play an essential role. So what exactly can we expect from the European cloud industry in the short term?

COVID-19 will not affect the EU IT landscape

The COVID-19 pandemic and its consequences will have a serious impact on the economic and political life of the European Union for a long period. The EU will need a change of priorities and business models in various sectors of the economy. However, the transition to industry 4.0 will continue, opening up new opportunities for diversification of the European economy and the emergence of small specialized companies. Large European infrastructure IT projects will continue to develop, transforming under the influence of other, more significant factors not related to the pandemic. The new generation of technologies will affect the growth of a number of projects in biotechnology, medicine, security, Smart City, and service sector. There will be more data for analysis, and applications for artificial intelligence.

Projects aimed at the digital transformation of Europe like GAIA-X, 5G networks, Edge Computing, will not stop, although there have been fewer high-profile statements.

The deep penetration of smartphones and social media, along with advancement in IoT technologies and growth of big data analysis, has resulted in an exponential growth in Big Data applications and usage of data centers globally. During the COVID-19 pandemic, Akamai servers were 100 percent loaded. For comparison, previously about 30 percent of their capacities usually remained available. According to the Cisco Cloud Index, we can see a significant dominance in the location of hyper-scale cloud data centers, with the USA containing 37-45 percent.

The crisis has confirmed the wisdom of strategic investments by Alibaba, Microsoft, and NTT in the development of new data centers in Europe which were established in 2018-2019. Over the last year, Amazon and Microsoft have launched more than half of all new data centers worldwide.

With the European market facing pressure from global clouds, European regulators responded with a couple of their own initiatives. In the UK, 80 percent of all enterprises are required by government regulations to back up their data for a defined length of time. Some EU initiatives like GDPR and GAIA-X, plus the "cloud tax" in France, appear to represent a big push for European businesses to store data locally.

In addition to government intervention, high expectations from end users are also fueling changes to the European cloud landscape. The rise of IoT technologies is stimulating growth in collaboration and edge data centers.

Keeping that in mind, there is one EU initiative that has received special attention and skepticism from US cloud companies: GAIA-X.

GAIA-X transforms into an integration project

"We need something like an Airbus for artificial intelligence," quipped German Economy Minister Peter Altmaier last fall, referring to the fate of cloud technologies in Europe. However, creating a new global player to compete with the cloud service giants looks pretty idealistic at first glance and was criticized by global cloud providers Amazon and Microsoft.

In recent months, some details about the principles and platform architecture of GAIA-X have been revealed. It appears to be shifting toward being an incubator of European cloud services with a wide international partnership where hyperscalers are also being involved. The European market should expect GAIA-X to be like a federation of services and platforms from different vendors under a unified governance process. Its official architecture was expected to be released in time for the Hannover Messe trade fair, however COVID-19 has affected the schedule.

It is safe to say that GAIA-X will not go either the Russian or the Chinese way. Russia seeks to build a system that can work even in conditions of disconnection and isolation. China is actively developing its own global logistics infrastructure, and Alibaba is part of this global strategy. With the help of GAIA-X, the European Union will solve the problem of European transformation.

The EU seeks to improve the efficiency of the economy, primarily through digitalization, robotization, and artificial intelligence. At the same time, the EU has to solve a number of systemic problems related to intra-European competition and pressure from external competitors. On the other hand, Europe has experience in creating large concerns such as AirBus, Siemens and Philips; however, the EU has abandoned the concept of creating a commercial competitor to global players in the cloud. GAIA-X has turned into a Global European Cloud Integration Project.

The European cloud computing market is highly diversified. Professional engineers today are solving the problem of unification, integration and control of information. They are now focused on creating a transparent exchange system to control data. At present in Europe, specifications, policies and standards are being hammered out, and an integration bus is being developed.

Of course, turning GAIA-X from a couple of schemas and proposals into a functional entity would mean a new stage in connectivity for European Digital Resources. However, before it becomes a significant player in the world’s digital infrastructure capable of competing with global players, GAIA-X will need a transportation layer to carry massive amounts of data at high speeds and very low latency. And, there is a technology able to close this gap.

In terms of developing 5G networks, the EU today is significantly ahead of the United States. The penetration rate and quality of mobile phone coverage in Europe is higher. The EU considers 5G networks as a real competitive advantage in the global market, bringing the possibility of increased digitization. The deadline is in July for the launch of the first networks.

The European 5G Action Plan is a strategic initiative which concerns all stakeholders, private and public, small and large in all Member States, to meet the challenge of making 5G a reality for all citizens and businesses by the end of 2020. 5G will enable industrial transformation through wireless broadband services provided at Gigabit speeds and the support of new types of applications connecting devices and objects.

The Global System for Mobile Association (GSMA) estimated the penetration of 5G technology in Europe by 2025 to reach 31 percent. We have a great chance to compare reality versus forecasts this year. For cloud landscapes it means mobile access to literally all digital resources and a big chance for VR applications. 5G means a great challenge for SaaS providers in load balancing and a significant shift in the architecture of many applications. For Europe, it will also be a trigger for boosting smart cities.

A good time for Edge Computing

Edge Computing is also receiving an additional impetus to development. Theoretically, edge computing is strongly connected to the success of 5G, but in reality, things are not so simple. Already at this stage, edge solutions are being actively deployed. Around 91 percent of European corporations are investing in the digitization of factories within the heart of Europe.

But 5G will need edge architectures to meet latency performance goals and requirements -- moving the application and content closer to the user is simply required to reduce the network latency impact. Gartner estimates that by 2025, about 75 percent of data will be processed outside the traditional data center or cloud.

The rise of 5G technologies and a wide network of data centers in Europe, together with the onset of maturity in software solutions and technologies like Apache Kafka -- or various edge computing, IoT software or hardware platforms -- leads us to believe in the success of many edge computing applications this year. 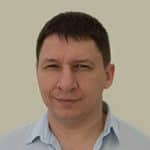 Constantin Bychenkov is CEO of Aligned Research Group LLC with a background in mathematics. He is the author of multiple academic publications in applied algorithms and medical image processing. Before founding Aligned Research Group he was a CEO at SMedX LLC, working with Fortune 500 companies, designing and implementing high-throughput, mission-critical solutions.
1 Comment

One Response to Cloud computing in Europe: Speculations on EU cloud tech in post-pandemic era