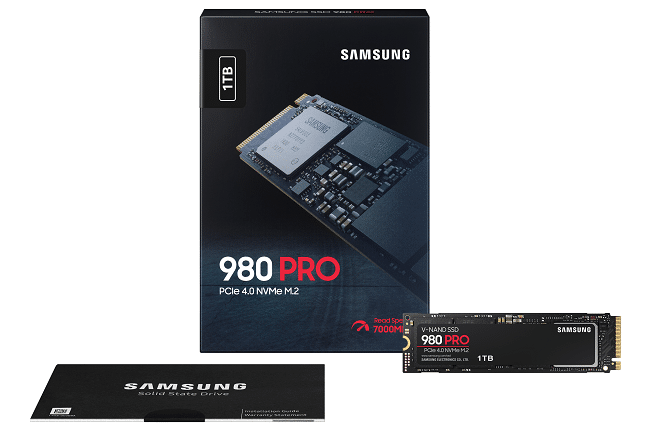 The solid state drive market is getting very exciting lately, with many manufacturers releasing PCIe 4.0-based drives. Just yesterday, we told you about a new model from ADATA. With a compatible motherboard/computer, you can achieve speeds that make SATA SSDs look downright pathetic.

Today, Samsung finally releases a PCIe 4.0 SSD for consumers. Called "980 PRO," it promises truly impressive speeds. Most importantly, it should be very reliable, as Samsung solid state drives have proven to last -- this is why many system builders swear by them (including me).

"Optimized for handling data-intensive applications, the 980 PRO is ideal for consumers and professionals who work with 4K and 8K content and play graphics-heavy games. All of the key components, including the custom Elpis controller, V-NAND and DRAM, are completely designed in-house to deliver the full potential of PCIe 4.0. This allows the 980 PRO to provide sequential read and write speeds of up to 7,000 MB/s and 5,000 MB/s respectively, as well as random read and write speeds of up to 1,000K IOPS 2, making it up to two times faster than PCIe 3.0 SSDs and up to 12.7 times faster than SATA SSDs," says Samsung.

The company also says, "In addition to enhanced performance, the 980 PRO comes with outstanding thermal control solutions for improved reliability. While most of today’s high-performance NVMe SSDs rely on external copper heatsinks to diffuse heat, Samsung’s 980 PRO employs a nickel coating on the controller as well as a heat spreader label on the back side of the SSD for efficient thermal management. These innovative heat-dissipating functions also allow the drive to maintain its compact and slim M.2 form factor. Samsung’s Dynamic Thermal Guard technology further ensures that the drive’s temperature stays at the optimal level, minimizing performance fluctuations over the long haul."