REVIEW Most of us who have been around technology for the better part of the last two decades will remember the name Commodore. Commodore computers were the best selling PCs of the 1980s. However, as Microsoft took center stage, the company faded away, eventually being bought by Dutch company Tulip Computers after filing for bankruptcy in 1994.

Enter a U.S. firm called Yeahronimo Media Ventures, a company which specializes in electronic entertainment. The group said last year that it planned to take the Commodore brand and make it "a worldwide entertainment concept," and the Mpet II is the first item to be shipped with that goal in mind.

The Mpet is a Flash memory-based MP3 player that comes in two sizes, 256MB and 512MB, retailing for $99 and $139, respectively. After the announcement of the player's launch earlier this year, BetaNews decided to see exactly what Yeahronimo had in mind for the Commodore brand.

The packaging is pretty simple, and includes the Mpet II, a pair of headphones, a lanyard, and a supplied AA battery. The player itself is very utilitarian; it does remind you of the design of the old Commodore machines. However, it works and fits nicely in the hand.

There is practically no weight to the unit, so using the lanyard to wear the Mpet won't be an issue - you will barely feel it. The headphones are of decent quality, and really what is to be expected of a lower-priced MP3 player. 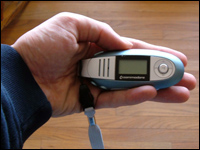 What I was very impressed with is the screen. Although for some visually impaired the smaller text may be tough to read, it actually is surprisingly useful compared with other small MP3 players. The uselessness of a small screen is the main reason why Apple's iPod Shuffle came without one, but Commodore has actually made it useful enough that the size doesn't become a problem.

Sound quality is as to be expected with a Flash player. I found myself turning on the equalizer to get better, and louder, sound. With the equalizer on the sound quality is not bad; however, I did have an issue with there only being five options: Bass/Treble boost, Rock, Pop, Jazz, and Classical.

What really sets this unit apart, and what I think will be an overall net positive for most potential buyers, is the Mpet II's feature set. For $139, you get a 512MB audio player that is compliant with Microsoft's WMA DRM (not Napster-to-Go or "Janus" DRM, but all other services), an FM tuner, and a voice recorder. For the voice recorder feature you have the option to use an external microphone. 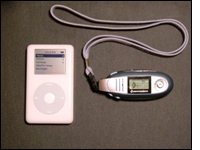 What I did not experience is the horror stores of synchronization with Windows Media Player. While WMP is not as intuitive as Apple's iTunes (I find the fact that it detects an MP3 player as a hard drive a bit confusing), it worked fine for me. I will say that it was tedious having to tell Windows Media Player what to synchronize, rather than having the software do it automatically for me.

So will we once again be living the Commodore life with the Mpet II?

The Good: The Mpet II has an impressive feature set for the price. While it certainly won't be a Shuffle-killer, it adds a lot to the Windows-based player market at a competitive price. And for nostalgic techies, this is a dream come true: Commodore is back.

The Bad: The sound could be a whole lot better. Some music just doesn't sound right on the factory equalizer settings. However, if you are looking for sound quality, I suggest a more pricey hard drive based player.

The Bottom Line: If you want a Windows Media based audio player, and don't feel like breaking the bank, or don't care about Napster to Go, the Mpet II is more than worth it. The unit is certainly priced to be competitive as soon as it enters the U.S. market later this year.