At Macworld San Francisco in January, Apple plans to introduce a new device called "iTV" (not the final name) that lets users stream video from their PC to their television, similar in function to what the Airport Express did with audio.

The company was expected to launch the iTV Tuesday, but merely offered a preview of the device and said it would be available in Q1 2007. It features USB 2.0, Ethernet and Wi-Fi for network connectivity, as well as component video, optical audio and HDMI outputs. The $299 USD box will be about half the size of the Mac mini and include a next-generation Front Row interface. 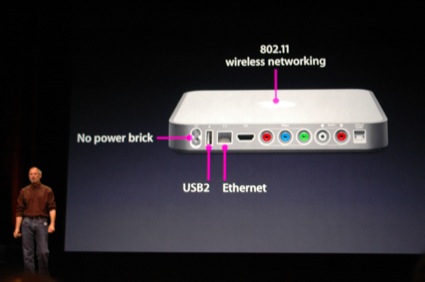