Verizon Claims to Have 'iPhone Killer'

Verizon is adding four new devices to its lineup of phones to be released for the holiday season, headed by the new LG VX10000 Voyager.

Dominated by its 400x240 touch screen, the Voyager outwardly looks like that other phone on the market. "We think it'll be the best phone ... this year. It will kill the iPhone," Verizon Wireless Chief Marketing Officer Mike Lanman said in an interview with Reuters.

Despite the more obvious similarity, in terms of configuration, Voyager's actually closer to LG's enV, a text-oriented device in Verizon's existing lineup. The enV, a somewhat homely, clamshell-opening handset, could be described as "pillow-shaped."

The Voyager has effectively replaced its predecessor's plain "tiny screen and buttons" layout with the large and sleek touch screen, and kept the inside's handy QWERTY keyboard intact. The touch screen affords large icons, and the now-familiar "swiping" motion navigates through an eye-catching UI. 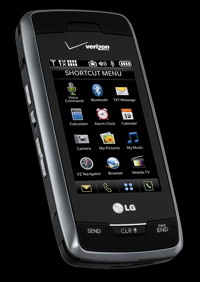 Additionally, tasks can be handled by either the force feedback-enabled touch screen, or by the keyboard as the user dictates.

With arguably the strongest network in the United States, Verizon's device starts with a leg up in what appears to be the battle to topple the iPhone's cachet.

35 Responses to Verizon Claims to Have 'iPhone Killer'