With digital rights management provisions being stripped from audio files now by all four leading music publishers, some of the digital music industry's leaders took time at CES today to evaluate the extent to which that loss could lead to gains.

In a sort of "what we have learned and where are we going" session, the panelists discussed the impact that DRM has had on digital music, its profits, and its availability, and where the consumption of music is going. 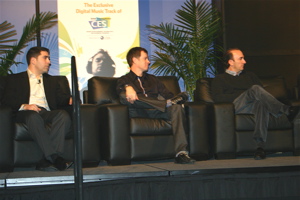 Barney Wragg of EMI opened by saying that for EMI, at least, the lifting of DRM has at last allowed the company to re-connect with its disenfranchised customers. Though his company has not released any numbers, he said that as soon as DRM began to fall away, EMI's album sales went "through the roof."

Ian Rogers of Yahoo said that he could think of five companies offhand that haven't been able to establish deals with Yahoo Music strictly because of DRM issues, and that music as it stands lacks the contextual data the Internet has the power to deliver.

Goldring added, "DRM was a terrible idea from the consumer's point of view, but it did help the music space evolve." The fact about music, he said, is that the industry is competing against "free." 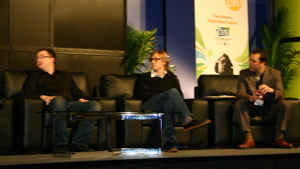 Years ago, Wragg said, everyone used to think that e-mail had to be downloaded onto a computer's hard drive. But today, everyone uses Web mail services like GMail where content resides in "the cloud," and subscription-based music services are the same way. The issue at hand, he argued, is how to make it work for people.

The rest of the panel seemed to favor the idea of subscription-based music services, noting the potential similarity to cable television with money in subscriptions, value-added packages, as well as in advertising.

Rogers said, however, that many services require users to go through "seven install screens, then a system restart, then they have to input their credit card," to pay X amount per month. It's no wonder these services aren't attracting as many people as they could; they need to be fast, easy and enticing.