Online fraud up over 20% per year, says FBI operation

The Internet Crime Complaint Center (I3C) has released its annual report of online misconduct, with 2007 showing a huge increase in the amount of money lost to theft.

Complaints came from a wide swath of the population, surprisingly even in demographic distribution: 57.6% were male and 42.4% female, 22% were aged 20-29, 23.4% aged 30-39, and 24% aged 40-49. The most populous areas of the United States had both the highest number of complainants and perpetrators, with California, Florida, New York, and Texas topping both lists. 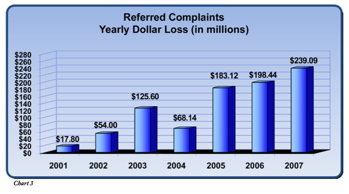 Per capita ratings, however show a decidedly different ratio. Washington DC had the highest perpetrator-per-capita rate at 99 per hundred thousand, and Alaska had the most victims at 356.41 per 100,000. Quite a juxtaposition: the smallest United States territory with the most criminals, and the largest with the most victims.

Among the most common crimes perpetrated were fraudulent online auctions, claiming 35.7% of the complaints. While this category is by far the most common, in 2006 it was far more prevalent, weighing in at 51.2% of all compaints. Non-delivered goods and payment fraud increased from 2006 to 24.9%, while debit/credit card, check and computer fraud ranked 17.6%. Other complaints, such as identity theft, financial institution fraud, threats, and the dreaded "Nigerian letter fraud" took 8.3%.

The study also highlights those scams which claimed the most victims for the year, many are variations of the same confidence tricks which have existed for decades. Some of these include pet scams, secret shopper scams, adoption or charity fraud, and "romance fraud."

Pet scams can target either a buyer or a seller, and frequent users of Craigslist.com should be well aware of the underhanded dealings that go on in animal trading. When aimed at buyers, those who advertise pets for sale defraud the victim by accepting their payment and not sending anything in return. When sellers are targeted, a check exceeding the asking price is given to pay for the pet, with the explanation that the extra money is for a third party who is taking care of the pet in the meantime. The buyer asks the check to be deposited and the difference to be wired to the third party. Unfortunately, the check bounces, and if successful, the buyer makes off with the extra money. Concerned parties and animal enthusiasts have taken to collecting a list of known fraudulent buyers and sellers to protect potential customers or sellers.

A very similar scam saw popularity in 2007, and came to be known as the "Secret Shopper Scam." Here, victims believe they are being paid to review restaurants or participate in secret shopping at certain stores. They get bad checks with the same instructions as the pet scam, with a third party being wired a percentage.

Thanks to online dating sites and social networks, 2007 saw a jump in romance frauds. In these confidence tricks, the perpetrator actually gets to know the victim on a personal level, luring them into trust. The scam typically involves two people very far apart, and the perpetrator planning to come and visit the victim. Invariably, the scammer doesn't have enough money for transit, and gets it from the victim. Then, some tragedy will happen "en route" or before the scheduled meeting (hospitalization, a mugging, family crisis) where the perpetrator claims to need more money. 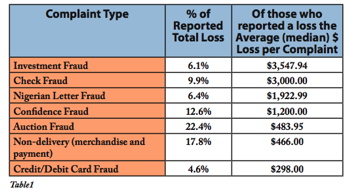 These statistics show that though fewer individuals are now succumbing to these low-tech tricks of trust, those that do stand to lose an even greater amount of money. I3C is a joint project of the FBI and the National White Collar Crime Center.

8 Responses to Online fraud up over 20% per year, says FBI operation