After a rocky start yesterday, when an announcement of its announcement was un-announced and a conference Web page was taken down, Google has launched an invitation-only beta of an online advertising campaign assistance tool for buyers.

What Google is calling Ad Planner is an extension of the demographic and targeting service the company unveiled just last week in its new Google Trends, but devised for an ad buyer who is looking for the right mix of sites to display his message, along with the available inventory to deliver that message. The basic premise is, if a buyer is interested in targeting a campaign toward a set demographic, Ad Planner can deliver a mix of sites with the impressions and audience makeup that would best suit that demographic.

"When using Google Ad Planner, simply enter demographics and sites associated with your target audience, and the tool will return information about sites (both on and off the Google content network) that your audience is likely to visit," reads a blog post from Google's Emel Mutlu this morning. "You can drill down further to get more detail like demographics and related searches for a particular site, or you can get aggregate statistics for the sites you've added to your media plan."

How Google comes to its conclusions about audience and subject matter, however, is -- like much of Google's services -- automatic and algorithmic. For instance, Google Trends comes to conclusions about sites' subject matter based on user-generated searches from Google that lead to those sites. For Trends' purposes -- and probably for Google Ad Planner as well -- traffic is determine by user interest level as perceived through Google searches, as if the only way a user finds a Web site is through Google and not through, say, the Bookmarks list in his Web browser.

As a result, Google Trends' conclusions about a site's user interest or traffic may not match what Google Analytics -- a tool used by Web sites to determine their own traffic based on sampling of hits -- says about that same traffic level. On the other hand, more direct and potentially accurate data such as traffic sampling may not be something a Google Analytics customer would appreciate Google sharing with its Ad Planner customers and Trends users anyway. Besides, Google Analytics requires its users to embed code in its pages being tracked, while Trends (and thereby, Ad Planner) estimate data for sites that have no such embedded code. 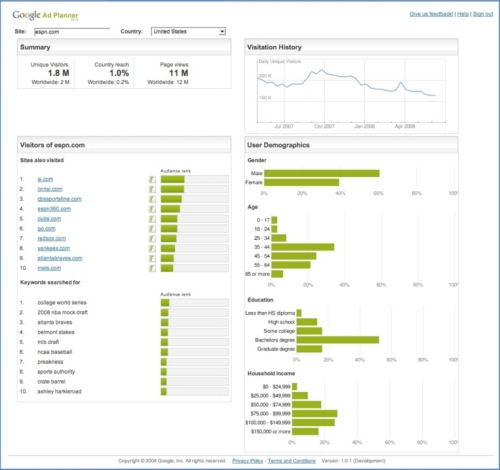 Analysts have been comparing Google's announcement today to Yahoo's buildup toward its pending release -- still expected in Q3 this year -- of AMP, formerly code-named "Panama," its comprehensive ad platform that enables buyers to purchase targeted inventory on its revolutionary Right Media Exchange. The truth is, AMP really is a complete platform built around both the ability to deliver tools to buyers, but to display ads on Yahoo-hosted properties and Yahoo affiliates.

By very stark contrast, Google Ad Planner is a service that may or may not, as Mutlu pointed out, involve the company's own platform. It analyzes sites based upon how Google search users link to them, not upon their membership in an ad exchange. And how it gauges such factors as site demographics (for instance, male vs. female, or approximate age) probably involves aggregating the information it does know about Google search users who are also Google account holders, with their search destinations. The company has not made that publicly clear just yet, though more information is likely forthcoming.

Still, the comparison this morning by publications such as The Wall Street Journal of Google Ad Planner to analytics services such as comScore, is way, way off the scale. Granted, Ad Planner will be an entry level tool that may attract customers who would otherwise have considered comScore's commercial service, but their qualitative and analytical levels are quite differentiated.