As with previous versions, the connector will sync a user's Hotmail account and contacts with Microsoft's Office productivity suite. The addition of calendar support rounds out the service, and offers functionality akin to Apple's MobileMe (although its more meant for desktops in this case, not mobile phones).

Microsoft Office users could get calendar sync in previous versions, but this required a subscription above and beyond the free Outlook Connector download.

Microsoft said the functionality works with Office Live and Windows Live Custom Domains, in addition to standard Windows Live accounts. When changes are made to one calendar, it is synced to Windows Live Calendar and any other machine running the Connector and Outlook.

Once synced, calendars from Windows Live can be viewed on Outlook when offline, the company said.

Watchers of Microsoft's moves say this is a good example of the company's commitment to a "software plus services" concept. While many companies are joining the rush to take their applications online, Microsoft believes that Web applications will work with, and never fully replace, the desktop. 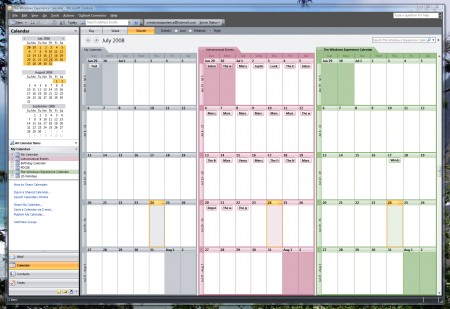