Intel readies the world for 'generation 7' of its CPUs

In 1993, Intel blanketed the world with advertising that stopped just short of placing a "TM" in front of the number "5" in the public conscience. This morning, the company has sent out an advance warning: Prepare for an onslaught of "7."

In advance of its annual US Developers' Forum next week, Intel today formally announced its branding for the generation of processors we've been calling by its code-name, "Nehalem." Rather than stay the current course of emphasizing the number of cores -- in which case, it might have been "Core 4" -- Intel will formally christen its desktop version of Nehalem with the new brand nomenclature "Core i7."

It's an indication that Nehalem represents the seventh generation of Intel architecture, as "Pentium" clearly constituted its fifth. But exactly what constitutes a "generation" has changed several times over Intel's history. And as a result, as Intel spokesperson George Alfs told BetaNews this morning, the "7" may be just a number.

"'i7' in itself has no meaning," Alfs told us. "However, it will be one of many future identifiers, and as products roll out through 2009 you will see how it fits in with other identifiers. Right now, it signifies the future performance and capabilities of high-end desktop Nehalem, and we needed to get the info to our OEMs so they could begin creating their marketing materials."

Up until 1993, Intel had been using numbers only as its CPU designations, with what was first called the 80486 eventually being "truncated" (albeit in reverse) to "i486" in company literature, and then just "486" in common parlance. After having touted the eventual coming of the "i586" to the technology press for about two years, the company surprised everyone in '92 by announcing the advent of a name brand, "Pentium," to represent what leading journalists were still insisting was really the seventh generation of the processor, though Intel maintained it was only #5. 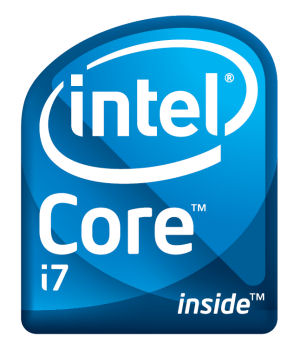 Intel's Core Microarchitecture processors, released only two summers ago and given the brand name "Core 2" (to emphasize its new dual-core standard), were what some at Intel considered its sixth generation. If you follow that logic (and not everyone does), Nehalem will be its seventh, as the new design -- to be officially unveiled next week -- is expected to completely erase two of rival AMD's main architectural claims against Intel:

First, Core i7 will very likely be a "true quad-core" processor. The company's current "Penryn" architecture, quad-core Core 2 and Xeon processors, are actually "double-dual-core" units that package two dual-core processors onto one die. While AMD tried to characterize this approach as a kind of cheat at first, Penryn's performance effectively narrowed to next-to-nothing any advantage AMD's Opterons could claim.

In an online conversation attached to his blog post in April 2007, Intel engineer Dileep Bhandarkar said there wasn't really an reason not to go with the double-dual-core methodology. "It seemed like the right tradeoff for our first quad core and since Penryn is a enhanced compaction of the previous core, we continued the same approach."

Second, the separate memory controller and the front side bus will become historical remnants, as Nehalem will integrate its memory controller onto the CPU, and adjust its caching methodology to compensate. AMD has been touting this development as a clear indication that Intel is following its lead, at least architecturally; though we've already seen what happens when Intel cruises along behind AMD's slipstream, to borrow a racing metaphor.

As the company confirmed once again this morning, each Nehalem core will employ hyperthreading, which Intel originally introduced as a stop-gap measure to enable dual-core-like operation while AMD was going forth with true dual-core. At any rate, expect Intel to talk about "eight virtual cores" next week, as each core should have the ability to simulate two for the sake of software.

Alfs reminded BetaNews this morning that the Core i7 trademark will apply to the company's "high-end desktop" products only, which is a clear indication that its current 45 nm generation should continue, probably under the current Core 2 brand, for some time to come. Future Nehalem brands for the mobile and server segments have yet to be announced.