Windows HPC Server 2008 ships: Is this a 'cloud' alternative?

"Cloud computing" is so attractive: it enables enterprises to outsource their IT by offloading their logic onto third parties' bigger hosts and save costs. But if businesses could own their logic and still cut costs, would they do it instead?

There's already a cottage industry whose foundation is the presumption that corporate data centers will be so inclined to outsource their data processing to so-called "cloud computing" services, such as the one developed by Amazon, that expenditures for high performance servers could go down in coming years. CIOs are already estimating they can save their enterprises as much as $300,000 per year annually, on average, in hiring expenses for IT personnel, if they're able to shift their resources to low-cost hosting services who'll maintain their infrastructure and their applications for them.

But what if that's not the only option? Microsoft Windows has never been a major factor in the upper echelon of high-performance computing, though it's playing a significantly greater role in everyday data centers. And Cray used to be the Packard or Studebaker of high-end computers, until the era of multiplexed Intel and AMD processors nearly made the brand a permanent resident of American history museums.

Both have something to prove, and last week they presented a new and impressive case for themselves: Consider, if you will, a relatively low-cost supercomputer -- not a datacenter cluster, but a small neutron bomb of sorts that can sit on companies' desktops, be maintained by maybe one or two people, and sell for $25,000. If it runs on Windows, one thing you can say for it is that businesses can find trained personnel to maintain it, and they won't necessarily be expensive. 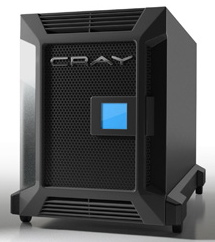 That's the significance of the two companies' joint effort in small-scale supercomputing. Last week, Cray premiered the $25,000 CX1 desktop supercomputer. And today, Microsoft took the next step forward in that effort by releasing Windows HPC Server 2008 to manufacturing on schedule; this is the OS that will be shipped with the CX1. It entered beta in November 2007.

HPC Server 2008 replaces Microsoft's Compute Cluster Server 2003 product line, at least officially. The way it really works, the Datacenter edition of Windows Server 2008 will be marketed toward data centers with clustered architecture; HPC Server will move toward this new niche Microsoft and Cray are building, of small but very powerful integrated units.

Running 64 cores at something north of 750 gigaflops, you could effectively say the Cray CX1 is a data center cluster of one. However, with OpenMP support, it can actually be paired with other processors fairly easily; and it's that support which is a critical feature of HPC Server 2008.

28 Responses to Windows HPC Server 2008 ships: Is this a 'cloud' alternative?