6:08 pm EDT October 14, 2008 - This afternoon, two Mozilla spokespersons confirmed to BetaNews the official availability of Firefox 3.1 Beta 1, which should include some features that could catch it up with IE8 Beta 2.

"The main work in beta 1 has been done on Web compatibility as well as enablement of new Web features such as geolocation, video, offline application support and CSS improvements," one Mozilla spokesperson told us. We've been invited to test such features as a thumbnail preview for tab switching.

"A second beta is scheduled for later this year to early next year, and the release of the product will be in early 2009," the second spokesperson told us.

2:56 pm EDT October 14, 2008 - Though official word has yet to come from Mozilla on the subject, a public version of Firefox 3.1 Beta 1 was posted to the organization's servers, and BetaNews has confirmed its authenticity.

One user interface change we noticed almost immediately was a big green "+" button on the right side of the tabs bar, that enables the user to open a new tab. What we are not noticing -- at least not yet -- is any clear indication of Private Browsing mode, a feature that is slated for the final version 3.1 and continues to be the topic of much discussion among Mozilla's community of developers. 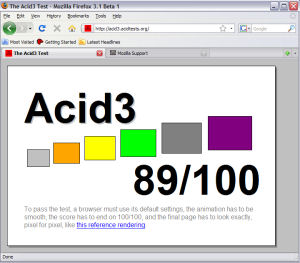 A Mozilla spokesperson told BetaNews this afternoon that the organization does not have a specific time for the public announcement of version 3.1 Beta 1. However, if history is any indication, Mozilla typically makes a public proclamation within 48 hours of the installation file's appearance on the organization's servers.

It's been a busy day, so our tests with Beta 1 have only just begun. However, we did have time to check out Beta 1's performance with the Acid3 standards compliance test. Here, Firefox posted its highest rendering score in a very long time: 89%. By comparison, a quick check of Firefox version 3.0.3 showed a score of only 71%.