New MacBook Pros look a lot like the early pictures

Apple's spotlight on notebooks this morning in Cupertino unveiled the company's newest line of MacBook and MacBook Pro notebooks, proving once again that there is nothing that Apple can make that the blogs can't leak.

The leaked images that have been circulating on Engadget and elsewhere for the last two weeks have been of the new MacBook Pro, which was announced today; likewise, the "brick" term that was thrown around in rumors referred to Apple's new manufacturing process of this chassis, also announced today.

The chassis has received outwardly minor, but innately important upgrades based upon innovations in the MacBook Air. Instead of a constructive process of thin layers of aluminum, Apple took a 2.5 pound "brick" of aluminum and worked through a process of removal, taking away material that wasn't needed.

Also just as rumored, the new MacBooks have a redesigned trackpad. It is now a pressure-sensitive glass surface with no accompanying mouse buttons. Instead, the entire surface is the button, and the multi-touch features now support four-finger gestures. All those who shunned Mac for its one-button mouse will surely take note of its new "no button/all button" interface.

While no dramatic overhauls have been made to the MacBook Pro's CPU, they now come standard with dual GPUs, an integrated NVIDIA 9400M GT which can be relied upon for battery conservation, and an additional 9600M GT for graphics-intensive applications (games, perhaps?). 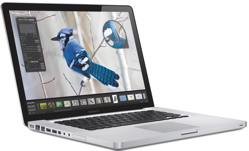 And for those who were expecting Apple to "shatter" the $1,000 barrier, it did happen today, although not with the model some pundits were anticipating.

A new addition was also made to the MacBook family. The newest MacBook looks to be another move in Apple's continuing quest to avoid the environmentally un-friendly badge.

The "greenest MacBook ever" comes in a 13-inch profile, has a 2 GHz Core 2 Duo/3 MB L2, 2 GB DDR3 memory, a single Nvidia GeForce 9400M, and 160 GB HDD for $1,299. A $1,599 version ups the CPU clock to 2.4 GHz and the HDD size to 250 GB, and also adds a backlit keyboard. These similarly offer the new glass trackpad and re-designed chassis. Upgrades include 4 GB DDR3, 320 GB HDD or 128 GB solid-state drive, and DVI, Dual-DVI and VGA output adaptors. These outputs are presented as options because a Mini DisplayPort has become the standard video out on all the new models.

Though there were some minor surprises, the leaks proved to be mostly accurate.