Some Mac veterans are in an ecstasy of grief over the absence of Apple's own FireWire port from the new low-end MacBook. But what does it mean?

Mac support and discussion forums have been blazing away since Tuesday's announcements, with users of FireWire video gear, musical equipment, and peripherals bewailing the absence of FireWire from the lower-end MacBook. The port is still present in FireWire 800 form on the MacBook Pro; FireWire 400 is no longer offered.

Some of the comments are somewhat overwrought, with users claiming that the absence of FireWire is "a deal breaker" for the MacBook. But Steve Jobs for one isn't having it.

In a letter written to a fan and republished on AppleInsider, Jobs allegedly stated that "Actually, all of the new HD camcorders of the past few years use USB 2." Other communications from Apple employees online state that USB, not FireWire, is the preferred interface for programs such as iMovie '08.

It's most telling that the only machine affected so far is the entry-level unit. As the industry approaches the ten-year anniversary of Apple's introduction of the FireWire (IEEE 1394) standard, its disappearance from the entry-level unit appears to be a clear indication that it's headed the way of the 8-track.

Or, for that matter, the way of the floppy drive. Apple was one of the first manufacturers to kick floppies to the curb -- ten years ago, the iMac came onto the scene flop-free. The outrage back then was titanic, and for some time users flocked to external USB floppy drives, but a decade later the format is all but unknown.

More recently, the MacBook Air turned up with no DVD drive. Both the new MacBook and the new MacBook Pro have SuperDrives. Apple may yet try again to wean us all off DVDs, but if they do, there are plenty of Windows and Linux options -- and, as with the floppy drives of yore, one can always go external.

A port, on the other hand, is tougher to integrate, though discussions of the FireWire situation inevitably turn to such workarounds. And Apple has been the main champion of FireWire since its launch; annoyed users can't simply turn to other platforms to get their ports back.

The outrage, then, isn't entirely for FireWire's absence from one laptop -- though habitual buyers of low-end MacBooks (eg. schools) will feel the burn, and it's a nasty surprise for tech folk who use FireWire's Target Disk Mode to extract data from older or failing machines. Instead, it's the writing on the wall for users who have invested serious money for specialty audio gear such as the newly introduced, Mac-only Apogee Duet -- or for independent creative types already managing on shoestring budgets.

It's also frustrating for people who just don't see sense in tossing good gear. As commenter "scntfc" notes on Peter Kim's Create Digital Motion blog, "The presentation of the new Apple laptops earlier this week made special note of being environmentally friendly.... If Apple were truly concerned about their environmental impact, they would: a. provide solutions to keep legacy products useful, and b. when possible, provide viable upgrade paths for computers and peripherals (and their constituent components) that they've already sold."

Commenters, complainers and workaround artists better talk it out fast, though; as of midday Friday, forum frequenters were reporting that Apple's simply yanking down from its support website the most heated discussions of FireWire's long slow goodbye. 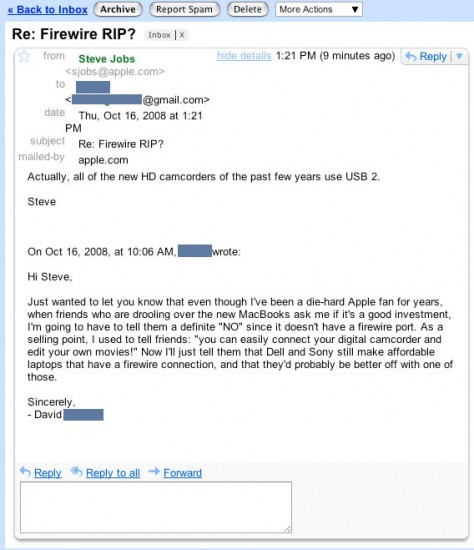