Yahoo has renewed its approach to making its site more social, rolling out a beta of its updated open profile system. The feature will enable Yahoo to better track and target ads to its users.

Yahoo has continually lagged behind the other "big four" search engines in the social networking space. Google owns Orkut and controls ads on MySpace, Microsoft has its own Windows Live Spaces and a minor stake in Facebook, and AOL owns Bebo.

While Yahoo attempted to establish its own social network in 2005 with 360, at about this time last year the company announced it was abandoning the project in favor of an open "Inbox 2.0" concept. Yahoo 360 users will reportedly be migrated over to this new profile system as well.

To set up a profile, Yahoo users simply sign onto profiles.yahoo.com with their Yahoo ID. Since it's still in beta, the profile system is not yet integrated with Yahoo's other services. In setting up a profile, however, it does automatically offer the user's Yahoo mail contact list to invite others.

User profiles provide crucial information that allows for highly personalized advertising, likewise, so do searches. By pairing the two, Yahoo will be able to deliver the kind of targetable advertisements that are earning companies like Google more than previously expected.

Yahoo's profiles can be populated with user data on: work, schools, personal interests, and relationship status, as well as the basics: age, sex, and location. Like all social networks, Yahoo users can establish connections with others, write comments, and share a news feed of their activity on Yahoo services like Flickr and Yahoo! Music. 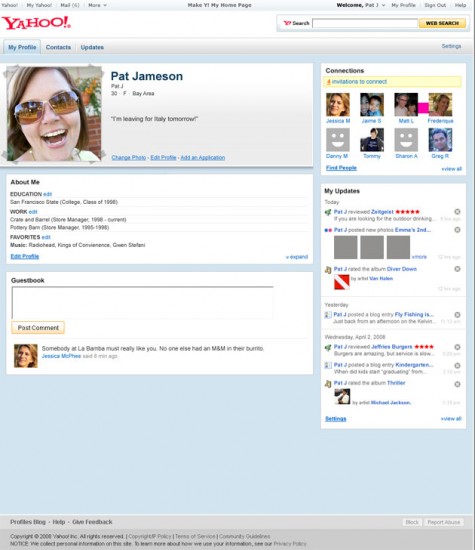