On the eve of availability from Verizon Wireless of the BlackBerry Storm, AT&T -- the exclusive provider of Apple's iPhone in the US -- has announced a Windows Mobile-based phone from LG with a now-familiar profile.

Korean phone maker LG Electronics today bore out industry rumors about internal development of an "iPhone killer." But in an unusual twist, the Windows Mobile-based Incite phone will be available through AT&T, the company which is also the exclusive wireless service provider for Apple's iPhone in the US. 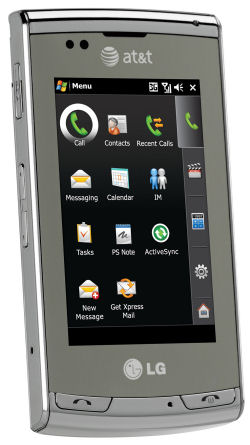 LG had previously issued a Windows Mobile-based smartphone called the KS20 into the European market. A US edition of that phone made an initial appearance on the FCC site late last year, feeding rumors among bloggers of an impending Windows-enabled "iPhone killer" from LG for the US.

Meanwhile, unlocked versions of the KS20 have also been available on the Web and in stores, at pricing ranging from about $275 to $340.

But AT&T will offer the Incite phone at a more attractive $199.99, after rebate, with a two-year contract -- the exact same deal it's offering for Apple's iPhone.

The pairing between AT&T and LG comes barely two weeks after LG issued a statement pledging "continued strategic collaboration" with Microsoft during a trip by Microsoft CEO Steve Ballmer to South Korea. LG and Microsoft had also collaborated in the past on projects such as a Windows Mobile-enabled version of a Chocolate phone for the Korean market.

Verizon Wireless, a major rival to AT&T, is expected to soon start selling a different "iPhone killer" -- the BlackBerry Storm from Research in Motion (RIM) -- at a similar price point.