REDMOND, WASH. - Microsoft has been working for years to be your TV-time buddy, while yearning also to forge deep relationships with Hollywood and other content providers. But Microsoft wants you to know it's always liked you better.

They've certainly understood it well enough over the years. Microsoft was an early member of the consortium that developed AACS, the DRM system for HD-DVD and Blu-ray. The infamous Sony "rootkit" DRM debacle was specific to Windows machines. The WMA format is critical to various media-restriction efforts, such as those in the Napster subscription model. The Microsoft Reader DRM effort prescribed some onerous twists on DRM for texts, including a version that only allowed buyers to view the content for which they paid on the screen of the machine on which it was purchased.

And the beat goes on. Vista's ferocious copy-restriction controls attempt to dictate how content files are handled based on the system's opinion of their legitimacy; one security researcher said after viewing an early iteration of the OS that "the Vista Content Protection specification could very well constitute the longest suicide note in history." And Microsoft notoriously even hamstrung its own DRM efforts, introducing the byzantine PlaysForSure program and then ignoring it when it released the Zune.

One Microsoft spokesperson yesterday quoted a statistic that 80% of computer users between 18 and 29 prefer to get their TV through their computer screens. So as demand rises, and installations become potentially more complex and more media-inclusive, something's got to give, because even top brass at Microsoft can get the DRM blues.

Later in the day, a group of reporters and bloggers toured the new, ultra-wired home of one of the company's top executives (who, by our agreement with Microsoft, shall remain anonymous). The executive described with great enthusiasm the three-year project, which incorporates three Blu-ray players and Xbox 360s, the service formerly known as XM Radio, comprehensive security and environment controls, a VPN for remote system management and upgrades, a whole-house UPS configuration, nearly a dozen ginormous LCD screens including several for which he'd "waited 'til [he] could slurp up the first batch" from Samsung. 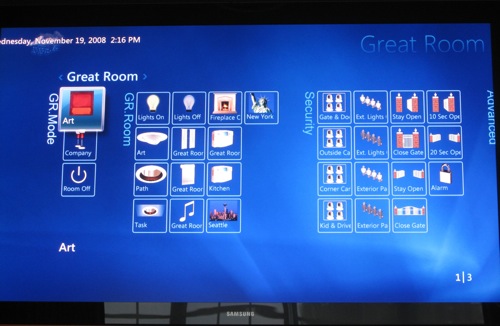 All of it runs on an in-house point-to-point gigabit switched network and and of it is operated with one -- just one -- big green button on the remote control.

In other words, it's not just your dream house; it's the dream house of a guy who's got access to very nearly unlimited money, technology and assistance (though time is trickier, since our exec did the all but two or three days' worth of the work on nights and weekends). So what hangs up a system like that? Getting the numbers of buttons from two down to one was tricky, but it's done; finding an enthusiastic and competent installation crew was crucial, but a determined interview process paid off. Even a retrofitting late in the process -- out with the HD DVD, in with the Blu-ray -- was a temporary issue.

No, it's DRM that can still twist up a system. Our Microsoft exec described in detail the problems of simply making it possible to watch paid-for DVR recordings on a paid-for system when the recording was on a machine other than the one directly connected to the screen in whichever room he happened to be in. His solution involves a complex system of record replication -- the only portion of the project that isn't built from off-the-shelf gear and software.

Yes, the exec says, something's got to give. With even less-monied users wanting to watch TV, HDTV, disks and online content, "ultimately we'll come up with another generation of DRM where you don't have to [go through such contortions," he says.

A system in which the right to view and enjoy paid-for content is paramount? "That's a long-term dream the company has."