DTV broadcasters: Suddenly loss of signal could be a problem

A series of comments filed yesterday with the US Federal Communications Commission on behalf of the National Association of Broadcasters and the TV industry's technology research laboratory, the Association for Maximum Service Television (MSTV), came to the conclusion that educating the American consumer about the existence of the digital TV broadcasting switch (now set for June 12) is no longer a serious problem. Much more serious, they condend, is the real possibility -- one which broadcasters are apparently just now addressing -- that certain viewers including those on the outskirts of analog broadcasting signals' coverage areas may suddenly find themselves without service.

"To strike an appropriate balance, stations that are predicted to lose two percent or more of their analog viewers as a result of a change in their geographic coverage area should have the flexibility to design the best way to communicate information, over-the-air, of this potential loss to their viewers, and, importantly, how to obtain specific information," reads the comments of the two industry leading groups (PDF available here). "We would support having these stations include in weekly on-air consumer DTV initiatives of their choosing a notice, such as: 'a small percentage of current viewers using an antenna to view this analog station may have problems receiving this station's digital signal; you can go to www.AntennaWeb.org to determine this and to see what outdoor antenna type will best serve your specific geographic location.'"

What broadcasters now perceive as the critical issue facing consumers is not confusion over the existence of the DTV transition, or the technology issues regarding how to acquire or use a converter box. In testimony before the FCC this morning, NAB President and CEO David Rehr stated that among cities where some analog stations did elect to throw the switch last February 17, the low amount of consumer confusion and panic made the switchover a "non-event," as he put it, with fewer than one percent of viewers in affected areas placing calls to FCC call centers overall, and with certain cities reporting as few as 50 calls.

A key problem, however, as Rehr told the FCC, is the possibility of signal loss -- that some viewers won't get the signals from the channels that used to serve them. During Hawaii's early switchover on January 17, the biggest issue consumers there reported to call centers, according to the Honolulu Star-Bulletin, was the inability to get a picture. 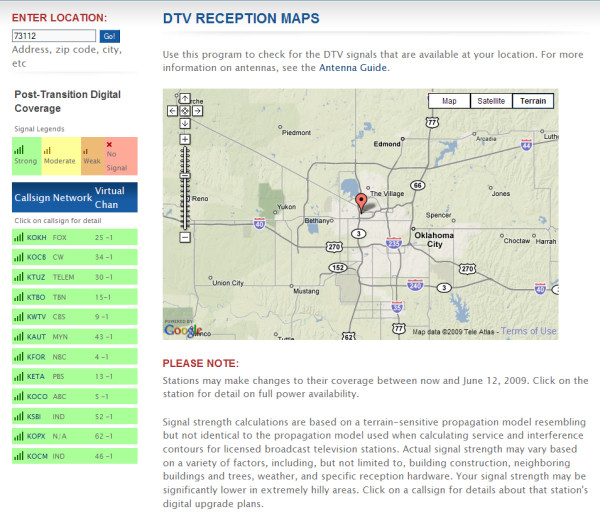 Currently, the FCC provides a live testing page for viewers to estimate the strength of signals for each DTV broadcaster serving a given ZIP code. But aside from virtual tools such as this one, the NAB would like for broadcasters to be able to notify viewers about the possible need for them to upgrade their aerial antennas. Some inside the Commission have suggested that stations mail notices to viewers in their area; but the NAB and MSTV are advising the Commission to avoid forcing stations to resort to mail campaigns, asking that it instead allow broadcasters to...well, broadcast the message instead.

A secondary problem some consumers may face, the NAB points out, is the likelihood that they'll need to rescan the DTV spectrum for stations after new stations throw the switch. Currently, a DTV converter box retains a list of "found" stations in its memory, and only tunes to the stations on that list. That's different from the analog days when viewers scanned the dial past dead-air for clear signals. Had every station thrown the switch on the same day, as originally planned, consumers might only have to scan the spectrum once. So now, stations are considering telling their viewers to keep scanning their converters periodically to check for new signals.

"Although we are still mining information from the February 17 transition of hundreds of stations to digital-only broadcasting to better prepare for the June 12 nationwide switch, information reported to NAB suggests that the number one consumer question [is] related to rescanning of over-the-air digital sets or converter boxes," the comments report reads. "Therefore, the Commission's proposal that television stations provide notice to consumers about the need to periodically 'rescan' when using over-the-air digital televisions or digital converter boxes connected to analog sets makes sense."

26 Responses to DTV broadcasters: Suddenly loss of signal could be a problem