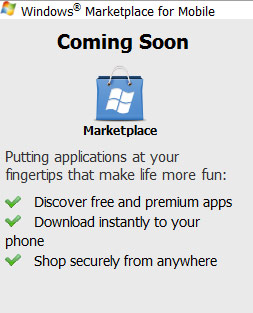 Windows Mobile Marketplace was announced at 3GSM in Barcelona in February, noting that it would be available when Windows Mobile 6.5 is released before Christmas this year.

A site related to the app store, http://client.marketplace.windowsmobile.com/ has gone up, causing speculation that the shop could actually be Web-based instead of a standalone application. The page and its code give very little away other than its obvious mobile phone screen formatting.

Meanwhile, Research in Motion has begun promoting its BlackBerry App World a bit more strongly than Microsoft has with Windows Mobile Marketplace. BlackBerry App World, which sounds more like an amusement park, will be compatible with all BlackBerry handsets running operating system 4.2 or higher that have a trackball or touchscreen.

Rather than set up a direct payment infrastructure, or arrange payment through mobile carriers, RIM has aligned with PayPal for app store transactions.