According to an account from a pool reporter assigned to Vice President Biden yesterday, and covered in its entirety by Time Magazine's Mark Halperin, Mr. Biden told a Washington gathering of both senior senators and motion picture industry leaders that he plans to accelerate the search for an Intellectual Property Enforcement Coordinator (IPEC).

Though the role has been treated as a creation of the Obama administration, it was President Bush who signed into law last October the controversial PRO-IP Act, stepping up enforcement provisions against intellectual property infringement and piracy, and creating the role Mr. Biden likes to refer to as a "czar." But it was Biden himself who coined the usage of the term "czar" to apply to policy leaders with authority over specific issues, who report directly to the President -- in this case, in 1982 when then-Senator Biden helped create a drug policy enforcement administrator.

"[I have a] simple message from the President and from me: We get it. We understand the immense value of your films and all of your art, and its effect on the economy, and, I might add, on the national character," the pool reporter quotes Mr. Biden as telling the audience, gathered to bestow an award in the name of the late MPAA Chairman Jack Valenti. Piracy, the Vice President added, is "pure theft, stolen from the artists and quite frankly from the American people as consequence of loss of jobs and, as a consequence, of loss of income."

The Vice President's language on IP issues is not new, having told The Hollywood Reporter two years ago he feels that piracy is "theft, plain and simple," just as if someone stole one's wallet. 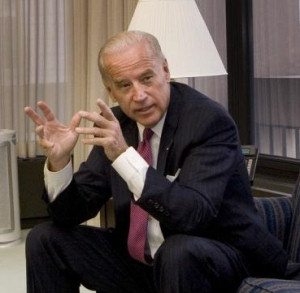 Mr. Biden specifically promised to give more leverage to the FBI to investigate cases of suspected piracy, and to the Justice Dept. to prosecute those cased, according to the pool report. That may actually end up being difficult, thanks to the final language of the PRO-IP bill itself. Although it authorizes law enforcement officials to seize property in conjunction with piracy investigations and then to destroy that property, for whatever reason, the IPEC will not have the authority to oversee these actual enforcement operations. That's for the Justice Dept.; the IPEC will be an independent authority.

Recently, the Obama administration has made headlines for appointing five attorneys to key Justice Dept. positions, who have not only represented the MPAA in the past but are also from the same law firm. Most notably among them is Donald Verrilli, Jr., the lead prosecutor in MGM v. Grokster.

Motion picture industry leaders and MPAA lobbyists are on hand in Washington this week for the industry's biannual summit. Kicking off the events yesterday, the MPAA released a report on the contribution of the movie industry to the US economy. Over $41 billion in wages were paid to movie makers in all 50 states in 2008, with average salaries of $75,000 per year, the report reads -- data points that the Vice President indicated he read yesterday: "That Hollywood sign shadow stretches all the way across America. You provide jobs that a middle class family can live on."