Napster will slash its subscription fees

After nearly six years as a subscription-based service, Napster will make its library of over 7 million tracks available tomorrow for as low as five dollars a month. In addition to unlimited streaming, users get to keep five DRM-free tracks per month, essentially making the streaming service, which formerly cost $12.95 per month, free.

Napster's leaked press release describes streaming as "CD Quality," and most MP3s available for download in the service are encoded at 256 kbps, but there are also tracks currently only available in 128 kbps. The bitrate of each individual track will be listed when purchasing.

The service includes 60 commercial-free radio stations with formats from Oldies to Electronica to an all Wu-Tang clan station and a station that plays only Christmas-themed Jazz. Napster also includes 1,400 built-in playlists, and playlists arranged according to Billboard chart rankings that go back as far as 50 years.

Microsoft has likewise been making an advertising push for its own subscription service, Zune Pass. Using the logic that at $1 per song, it would cost $30,000 to fill an iPod, Microsoft touts the practicality of a subscription service with unlimited consumption. During last year's holiday season, Microsoft began to let Zune Pass subscribers keep 10 DRM-free tracks per month as a part of the $14.99 subscription cost.

Interestingly, this is the exact same approach that Napster took in 2005 when it advertised Napster to Go during the Super Bowl in a slot called "Do the Math." That commercial said it would cost $10,000 to fill an iPod with $1 songs, when it would cost only $15 a month for unlimited streaming through Napster. Maybe with these updated figures, Napster's value proposition makes more sense. 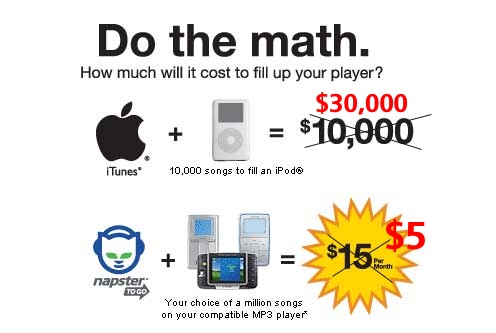 9 Responses to Napster will slash its subscription fees