It's a question friends and family have been asking me ever since The Wall Street Journal reported last Saturday that Apple Chairman and CEO Steve Jobs had undergone a liver transplant two months ago: Should our health records be made public?

I admit I'm of two minds on the issue. On the one hand, Apple shareholders have the right to know how the company they essentially own plans to manage itself both today and in the future. They deserve enough information to make informed decisions about whether they wish to retain their ownership stake and how they wish to remain involved, as shareholders, in the evolution of the company. It's a fundamental pillar of our economic system that publicly traded companies provide enough transparency to keep shareholders informed -- not to mention senior leaders honest.

On the other hand, CEOs are regular people, too. And they deserve the same right to not have their insides displayed, in color-enhanced 3D relief, on the evening news. We'd get really upset if Aunt Martha's blood test results were scanned and uploaded, complete with scripted narration, to YouTube. Yet we seem to believe similar openness is acceptable with near-rock stars like Steve Jobs because, well, they're near-rock stars. Somehow, somewhere within the complex interrelationship between captains of industry and their vast communities of shareholders, customers, suppliers and observers, a line has been crossed.

When it comes to senior leadership, few companies are under as close scrutiny as Apple because, frankly, few companies have tied their future success as closely to the big kahuna. He is known widely for walking into product planning meetings and redirecting entire projects to suit his drive for simplicity and style. He's so closely tied to the company's products that a Jobs-less Apple is simply inconceivable to some. A colleague once likened the Apple-Steve Jobs relationship to a favourite lunch choice, peanut butter and jelly. While you could indeed make a sandwich of one ingredient without the other, it just wouldn't be the same.

Although I'm not willing to directly compare apples to peanuts, I think all the wondering about Apple's future either with or without Steve is fair game...to a point. Love him or hate him, we all agree he isn't the typical, tie tied-too-tight, anonymous CEO. Lost in near-oblivion during the lean years following his ouster, Apple has done more than simply regain profitability and industry relevance since his return. It has redefined entire new markets -- media players and smartphones -- and established new industrial design and marketing benchmarks. It's stretched beyond its roots as a tech company, even dropping the "Computer" from its name, to become a cultural pacesetter, the kind of company other companies want to be when they grow up.

Apple is also a company that raises corporate secrecy to a high art. It's not something I say grudgingly. Indeed, in an industry where you're only as hot as your latest device, uncontrolled leaks of information can erode your competitive advantage in a blink. Apple's response has always been to tightly control what's shared, when it's shared, how it's shared, and who does the sharing. In the Internet Age, when an anonymous blog posting by a disgruntled employee can go viral before lunchtime, this level of control is remarkable.

That secrecy lies at the root of the current debate over the health of Steve Jobs. In Apple's world, even anonymity is delivered with an extra dose of stealth: The Wall Street Journal's original story was unsourced, meaning the paper didn't even want to say it had received its information from anonymous sources. CNBC later confirmed the story through anonymous sources, and in doing so reinforced how seriously Apple takes its external silence. In the absence of any hard evidence of succession planning, shareholders and observers have had little alternative but to speculate on Apple's future plans, and how deeply the absence of its uber-leader will affects its long-term prospects.

On the surface, Apple events aren't as much fun in recent days as they used to be. Marketing VP Phil Schiller, who delivered the Macworld and WWDC keynotes in the CEO's absence this year, isn't anywhere near the showman that Steve Jobs is. While his presentations are informative and well delivered, they don't make audience members feel like dancing in the streets. Operationally, Tim Cook seems to be doing a great job filling in as CEO. Share prices are up, most of the company's hardware offerings have been nicely refreshed, and the iPhone 3G S introduction seems to have gone well.

But Jobs hasn't been gone long enough for his absence to really be felt on the product pipeline. It'll take years of product introductions to get a real sense of whether Apple can go it alone without its one-of-a-kind co-founder and whether or not the bench was deep enough to maintain his legacy. My take: Anyone smart enough to turn a failing computer company into the cultural powerhouse of its time is probably smart enough to build a team that can carry the ball after he's gone. 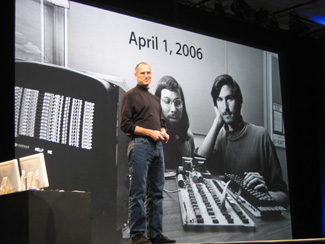 For all the wild success Steve Jobs has achieved in business, he remains a husband and a father facing down a serious, potentially life-ending illness. The image of a robust, confident, billionaire captain of industry clad in his iconic black turtleneck and jeans as he delivers yet another blockbuster message to the world does little to mask the frightening reality of his current state. Sick or not, every CEO eventually leaves the post. And life goes on.

If you currently own Apple stock or are mulling over the possibility, you either do or do not believe that the company has enough of a succession plan in place to keep things going after his inevitable departure. You'll make your buy/hold/sell decision based on whatever information you can assemble at the time, and then you'll work with your financial advisor to maximize your returns and minimize your exposure to risk.

Hopefully along the way, you'll leave the speculation over the health of Steve Jobs out of it and let the company's performance speak for itself. Whatever we do for a living, we all deserve some quiet time to lead our lives as we see fit. Steve Jobs should be no exception.