Yesterday, Apple began to push out the Apple TV version 2.4 software update, which adds several usability improvements, including one tied into the iPhone 3.0 software update.

It's by no means a monumental update, and its minor improvements now allow users to view movies by genre, title, or unwatched status. TV shows and podcasts may also now be viewed according to date, show title, or unwatched status. A Flickr tag search has also been added, which allows the user to find new photos or use them as Apple TV screensavers.

The big news is the new gestural control in iPhone Remote 1.3, which requires the 3.0 software update. While watching videos, flicking right and left will fast forward or rewind, multi-tapping will increase or decrease the shuttle speed, and dragging two fingers left will do a ten second replay. Dragging or flicking while on the main menu scrolls through items, tapping will select the on-screen item, and long-pressing "menu" will go back one level.

Some Apple TV users who have Boxee installed have reported that auto-update will wipe out Boxee, necessitating a new install. 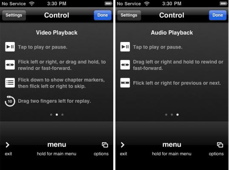