With as many set-top boxes as there suddenly appear to be in the home video market, as long as any one of them has a strong central feature, it could be the one that becomes a household name. Look at TiVo, Slingbox, and AppleTV: Each of these built a TV-based ecosystem around a single unique feature: TiVo's was the DVR, Slingbox was the place-shifting concept, and AppleTV was iTunes.

Now, IPTV startup Myka has designed its own media center STB, focusing on BitTorrent as its winning central feature. And while it doesn't carry all the functions one would expect in a home theater PC (HTPC), it offers enough power and functionality to be considered a little more than your run-of-the-mill set top box. Like the title says, if you're a little bit lazy...you could even consider Myka a pre-built HTPC. Betanews got an exclusive look at this new device. 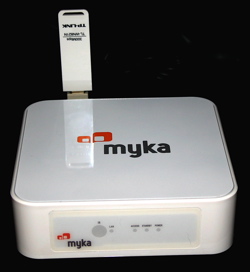 Openness and simplicity do not often walk hand-in-hand, as anyone with a good deal of experience the various Linux distributions knows. Yet somehow, Myka has managed to deliver a Linux-based STB with the fantastic customizability of that open environment that still manages to "just work."

For example, it can be used as a simple home media server and be loaded with content such as movies, music, and pictures to be watched on the living room TV. Personal media players (it's iPod friendly) and mass storage devices can all plug into Myka via USB and be navigated with the remote control. Users can also browse streaming Web video sites such as YouTube and CNN, with more services expected in the near future. 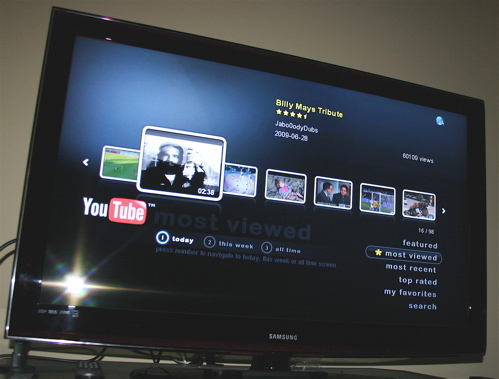 To set up torrent downloads, users can log onto my.myka.tv on their PC, type in their desired torrent's URL, and the STB automatically starts to download it. It ends up feeling a lot like the Netflix Instant Queue for the Roku set top box or Xbox Live. 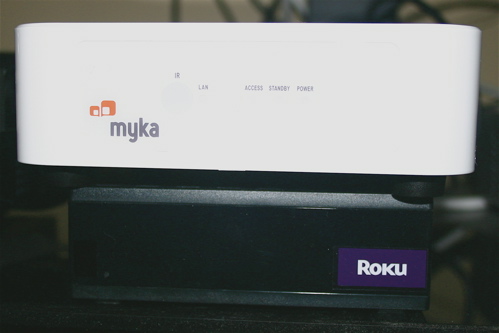 Myka's Torrent Manager includes a weekly scheduler, which lets the user set limits on downloads so as to not trigger throttling or exceed bandwidth caps. The simple graph sets limits on upstream and downstream speeds and select times of day when full sharing, limited sharing, or no sharing is allowed. 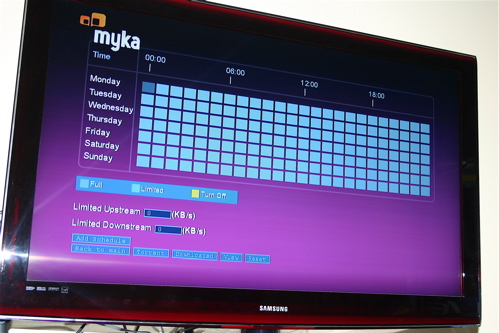 While video quality will vary depending upon the file being played, Myka's default resolution is 720p at 60 Hz. When the device is connected via HDMI to a higher resolution screen, it automatically corrects itself. We tested the device at its maximum resolution of 1080p 59.94 Hz, and .MKV and .Xvid files played back in high definition with no lagging or crashing.

Beyond the simplicity, the device offers a number of features that will appeal to users looking for more control, or users who are familiar with Syabas NMT (Networked Media Tank), upon which Myka is based. The device includes a UPnP AV Server, myiHome Server, an FTP Server, Samba Server, NFS Server, its Torrent Client, and a Usenet Client, all of which can be turned off or halted as the user needs. Because of this server technology, Myka can be contacted via telnet, FTP, or simply through a Web browser connected to the home network. 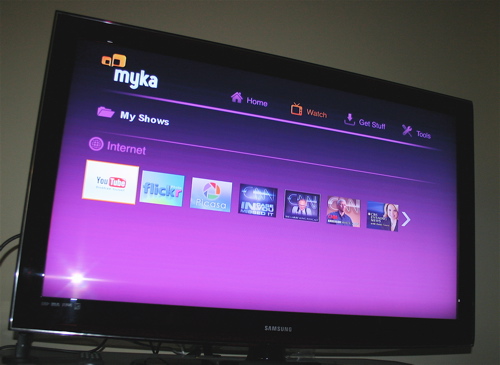 In the end, Myka is a solid product that delivered everything it is capable of delivering with zero failures in our tests. Every USB device we plugged in, which included phones, Mp3 players, and USB HDDs were all instantly recognized, our networked HDD was recognized, and FTP and browser-based access were all flawless. There are other products on the market which have been designed to do the same things as Myka, but actually offer less at a higher cost. 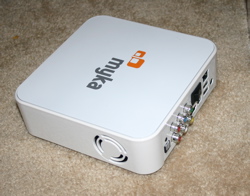