Though the news actually leaked out a bit early in the "AppPack" at the end of July, Geodelic's location-based Android app called Sherpa was officially launched yesterday for all Android users.

Sherpa combines "Web 2.0"-style profiling with location-based and contextual data to suggest nearby attractions, restaurants and retailers. Using a learning engine called GENIE (Geodelic ENgine for Interest Evaluation), Sherpa automatically learns a user's favorite locations and lifestyle behavior.  If a user eats out more than shops, it modifies itself and tailors the experience to begin showing more restaurants and less retail stores. Sherpa will also only give suggestions that are pertinent to the time of day, so if you run a search at 2:00 am looking for government offices, you're not likely get anything without searching specifically.

I had originally intended to run some serious urban tests of Sherpa when it became available yesterday, seeing if it could discover a new 24-hour kebab joint with free Wi-Fi or something similarly suited to my tastes. But alas, due to my poor scheduling, I've been stationed this week in a remote beach resort in North Carolina (working instead of drinking copious amounts of tropical-flavored alcoholic beverages).

But that's okay. I can still harness the single mighty bar of GPRS to see what Sherpa recommends when you're in a location outside of a city less than 2 square miles in size with a population of less than 500. 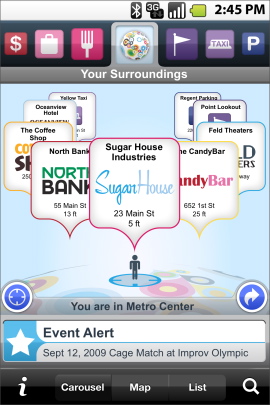 Even if you're in the middle of nowhere, Sherpa's interface is fast, smooth, and responsive. So my experience, despite being an uphill battle against shoddy connectivity, was still favorable. Upon startup, the app gives you a quick view of the nearby establishments in a coverflow-style layout called Carousel view. This can be switched to either a map view or a simple list view. These results can then be narrowed down by type, like groceries, dining, banks, movie theaters, cafes and coffeeshops, nightclubs and bars, arts and culture, establishments, and so forth.

Because I've been in such a remote location, my list of surroundings shows only 20 items, which are all 10 miles away or more. Strangely, even though I'm at a beach resort at the moment, the "On Vacation" category comes up totally blank.

Franchises show up in the list with the most complete information, including explanations, customer reviews, and images all grouped under the company's logo. For smaller independent establishments, information is more sparse, but it will include at the very least the address and buttons to call the location or get directions there. You can opt to view directions in the browser or in the onboard Google maps application, which is handy enough. However, it does not offer directions in third-party GPS apps such as Telenav Navigator.

Also, the app does not yet allow users to actively build their interest profiles. Instead, it offers a simple check box to turn GENIE's "adaptive learning" on and off.

One of the handiest features of Sherpa is its search menu, which lets the user poke through pre-populated lists of potentially useful services. If you need to find a doctor, you just click on the search icon, then "Establishments > Doctors & Dentists" and it tells you the doctor nearest to your location. You also do not have to use your current location as a reference point. If you're helping out a friend or scouting out the surroundings for a new house, Sherpa allows you to type in a city and state or ZIP code as the starting position.

T-mobile wouldn't have built Sherpa into the MyTouch 3G if it wasn't at least a little bit useful, and it's definitely a new must-have app for the platform. Though it duplicates some of the functionality of other GPS apps, it's free, easy, and provides an attractive graphical representation of your surroundings, even if you are out in the sticks.

Sherpa is available in the Android Market now.