Windows 7 Upgrades: Are they going to be too much trouble or just about right?

Is Microsoft asking too much of consumers and small businesses planning to upgrade existing Windows XP or Vista PCs to Windows 7? That's the question I asked several analysts after reviewing a chart Microsoft provided to veteran technology reviewer Walt Mossberg.

Out of 66 upgrade scenarios, only 14 allow for "in-place" upgrades. The majority of scenarios require "custom install," which means either installing Windows 7 to a new directory or onto a clean hard drive. While data can be backed up and recovered, applications would need to be reinstalled.

I see the number of "custom install" scenarios as being, at first glance, onerous. The analysts don't agree.

Michael Gartenberg, vice president of strategy and analysis for market-research firm Interpret, acknowledged that "there are a few too many SKUs of Windows 7" but the upgrade "matrix to install isn't really as complicated as folks are making it out to be. It can easily be summed up as like version of Vista to like version of Win 7. Ultimate can install over any version of Vista, and XP requires clean install. That's all there is to it really and, in fact, that's how Windows updgrades have worked in the past as well."

"I would not personally perform an in-place upgrade from Windows Vista and Windows XP," Cherry said. "My main reason is that I feel that over time Microsoft's operating systems get bogged down with leftover pieces of uninstalled applications, temporary and other files that were created with a purpose but long since abandoned -- and in particular, registry entries that are no longer needed but bloat the registry so that it becomes more fragile and in my opinion slows down my computers."

Cherry views an "OS upgrade as an opportunity to conduct significant house cleaning." His is a professional's -- even product tester's -- approach: backing up data and restoring applications slowly. "I restore only my current working files. This way as I begin to work with the new OS if I encounter any strange behaviors I know they are coming from the OS rather than any flotsam and jetsam left over from the previous installation. I can tell what was really fixed without the nagging doubt that I am still fighting some artifact of the old OS. I slowly restore applications and data on an as-needed basis." 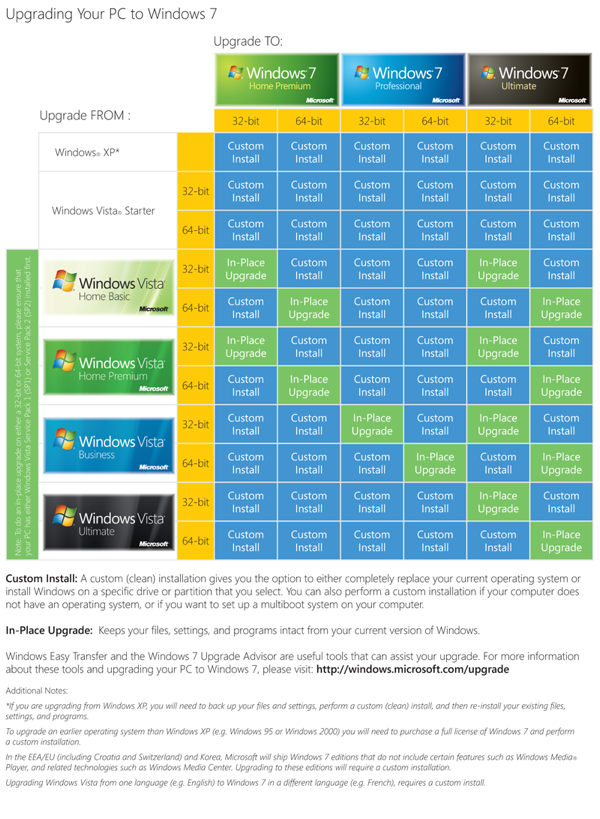 Windows 7 upgrade chart provided by Microsoft to All Things Digital

I have to ask: Should consumers or small businesses -- even enterprises -- be in the business of house cleaning Windows during upgrades? The windows to my apartment gunk up if not regularly cleaned. But I don't replace them to clean them. I don't see why the Windows running on my PC should need such deep cleaning -- replacement essentially -- and restoring the digital equivalents of shutters, screens and locks.

By the way, I asked both analysts the same question: Is Microsoft asking too much of customers, meaning are there too many scenarios where upgrading to Windows 7 is unnecessarily burdensome?

The second question: Will the many "custom install" scenarios affect how quickly enterprises migrate to Windows 7?

"No, most Enterprises have in the past used OS updates to push out clean installs to users and have procedures in place to back up user data, push out and image and restore data," Gartenberg said. "It's the time and cost of updates in general that will have a lot of organizations opt for a phased migration over time, as it has in the past."

Cherry generally agreed. "This may be a bigger consumer issue than enterprise issue. First, many enterprises already use folder redirection and roaming profiles to decouple user state data from the computer. Second, many enterprises will create a custom image with OS and applications, and deployment becomes more about deploying the image than relying on running the installation program over and over again."

"Why are there less in-place installations?" Cherry asked. He speculated that "limited testing resources" is the primary reason. "The test matrix for releasing Windows has to be complex just with all the various hardware and application variations. Now consider adding in all the permutations to handle upgrading from this version with this service pack and all of Office versus the same OS with a different service pack and just Word."

Cherry makes a good observation. Most enterprises standardize discrete portions of the IT infrastructure on the same software and even hardware. Testing complexity also multiplies across these pockets of standardization, where software (and sometimes hardware) may all be the same in one part of the organization but different across various groups.

The final question derived from my concerns about compatibility. Many enterprises complained that Windows Vista broke existing applications, something largely remedied after release of Service Pack 1. So I asked the analysts: Microsoft promised that Windows 7 would be just as app compatible as Windows Vista. Does the number of "custom install" scenarios affect that promise?

But Cherry assumes that a clean installation is necessary. I don't think that it should be. Do you?

Gartenberg's answer started nearly the same as Cherry's: "I don't think so. In fact, the fact that Win 7 offers a compatibility mode via virtualization for XP means that Win 7 will actually have better backwards compatibility story than Vista did. As a rule though, without that virtual XP, apps that work on Vista will work on 7 but apps that did not run on Vista are not going to work on 7 either."

The two analysts largely dismiss the number of "custom install" scenarios as insignificant. I agree for enterprises but resoundingly disagree for consumers and small businesses. Cherry and Gartenberg aren't typical buyers. They're sophisticated users, as are many Betanews readers. Cherry cleans house when upgrading, which makes sense as a practice to me, but one I contend should be unnecessary.

So, please, let's have some debate in comments about this topic. Do you agree or disagree with the analysts? Perhaps you think there is no problem, but for different reasons. Or like me, you believe Microsoft asks too much of consumers and small businesses. Whatever your position, please enter the comment debate.

42 Responses to Windows 7 Upgrades: Are they going to be too much trouble or just about right?