Which Microsoft Office version is most popular at US retail stores -- brick and mortar or online? Office Home and Student 2007, which inherited the position from XP and 2003 versions of Office Student and Teacher. Home and Student accounts for "85 percent of Office sales, either Mac or PC," said Stephen Baker, NPD's vice president of industry analysis.

I asked Baker for the percentage because it's that time of year when students are preparing to go back to school and Microsoft and retailers practically give away Office Home and Student. Last week, I spotted the software, which normally sells for $149.95, at Microsoft Store for $99.99. That's a good deal, right? Wrong. This week, I saw the software at my local Costco selling for $81.99, after mail-in rebate. That's an even better deal, right? Wrong. Amazon sells the software for $79.99, no rebate.

That 80 bucks doesn't buy one but three Office Home and Student licenses. Three installations for $80. By comparison, Amazon sells Office Standard 2007 full version for $299.95, and that's for a single license; one activation. Microsoft Store sells the same software for $399.95.

So, I wonder: Who buys Office Home and Student? It's not like Microsoft or retailers check student IDs. That "Home" could apply to pretty much anyone. If someone runs a business out of the home, doesn't he or she technically qualify for a cheap copy of Office?

Microsoft doesn't talk about Office Home and Student or Student and Teacher editions piracy rates, but they have to be fairly high at retail if either version accounts for the bulk of sales. The company considers the purchase of software meant for one channel bought from another as piracy. Example: OEM Windows versions sold separately from new PCs.

According to current US Census Bureau statistics, there are about 25.4 million business firms in the United States -- 26.9 million when adding operations with single locations. Among both categories, there are 19.5 million non-employer businesses, with the majority being sole-proprietorships. Out of the 5.9 million employer firms, 3.8 million have 1-9 employees. So, in the United States, out of 25.4 million firms, 23.3 million have fewer than 10 employees. Where do these smaller businesses buy software? For the majority, it's brick-and-mortar or online retail stores. 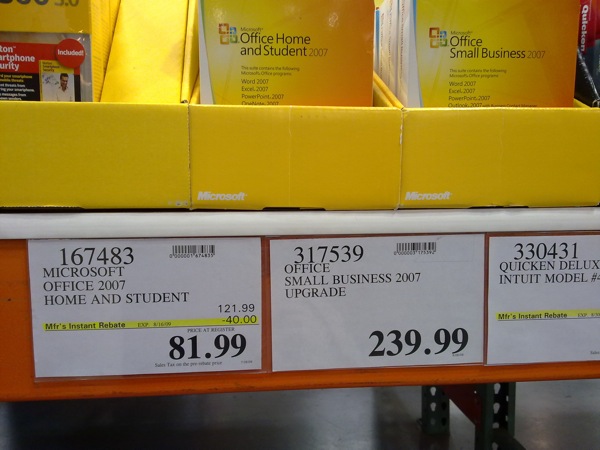 How many of these small or home-based businesses buy Office Standard 2007 or another version, when only 15 percent of US retail sales go to any edition other than Home and Student? Surprisingly few, if I rightly interpret NPD's US retail sales data.

While Microsoft doesn't talk about cross-channel piracy, the company doesn't ignore it, either. With Office 2007, Microsoft swapped out Outlook for OneNote in the consumer version. Before that, XP and 2003 Student and Teacher editions were feature identical to Office Standard, but with three licensees/activations for $250 less (even bigger difference during back-to-school buying season).

But is Outlook really that necessary for home-based or small businesses, when there are alternatives like Gmail or Windows Live Hotmail? It has been sometime since I checked in with the Hotmail team; but the last time, globally, small businesses accounted for more than 50 percent of users. Most people I know who aren't Windows geeks or use Outlook at work don't use Outlook. How about the people you know?

I first wrote about Student and Teacher edition in 2002, about 10 months after Microsoft started offering the version. At the time, analysts speculated Microsoft introduced the SKU to cut Office's price for consumers without jeopardizing business pricing. I have to ask: Is Microsoft victim of its own success, because of cross-channel piracy? The version 2007 SKU change strongly suggests so. Three licenses are tempting for the price.

What about future pricing and also retail market share? The heavy discounts won't last. "They always get aggressive on price in August, because that's when people are buying for back to school," Baker said. "This is time of year that you go nuts. That's when the volume's there; you don't want to let that stuff slip through your fingers."

What about that low pricing? "You saw $99 last year," Baker said. But 80 bucks? He said that Amazon typically is lower than other retailers, but the $79.99 price is about $5 less than what he remembers from last year. 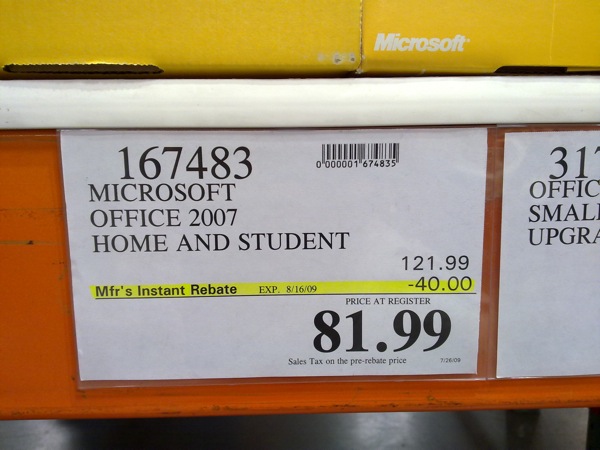 About retail share, Baker said: "I don't think it's anything dramatically different form last year." He's right. Share was 80 percent in January 2007 and about the same three years earlier, according to older NPD data I looked up. I suspect 85 percent is about as high as the share will go.

But could the market share go down? That's the $64,000 question of the day. Microsoft has acquired domain Office.com, presumably for the forthcoming Office Web Apps. I've read lots of punditry about Microsoft trying to fend off perceived Google Apps competition. But what about Office Web Apps competing with Office Home and Student among consumers and small businesses?

I contend that Microsoft already has lost Office revenue because of home-based and small businesses buying Office Home and Student. That $80 is a great deal -- about $26.60 per license or $50 at full price -- but how much more attractive is free?

The software will be free for consumers, and the consumer Office version accounts for 85 percent of sales in the United States. That's not complex math to figure out. There has to be some cannibalization, unless Microsoft requires Office on the desktop as adjunct to Web Apps.

Something else: How exactly will Microsoft separate consumers from home-based or small business customers for Office Web Apps, when it can't for Office Home and Student? Perhaps there will be answers when or soon after Office Web Apps begins its Technical Preview later this month.