For some time now, Chinese engineers have been working on an offshoot of the Android smartphone OS that uses a proprietary front-end, with the intention of creating a network for functions and applications that will rival that of Apple's iPhone. It's being called the Open Mobile System (OMS), and the app platform is now being referred to as Ophone.

This morning overseas, China Mobile showed off its newly completed Mobile Market applications store, the country's first competitive online market for Ophone apps. Since there is no single Ophone unit for China, multiple manufacturers may be involved in producing the phones themselves; and as attendees of this morning's event learned to their surprise, Dell -- the company that has long been hesitant to enter this market -- was one of them.

Attendees saw a no-frills phone that the Chinese Web site tech.163.com journalists immediately concluded was the Mini 3i, a GSM phone that a leaked document from China Mobile made direct reference to. And indeed, the phone does fit what minimal description there has been of the device. 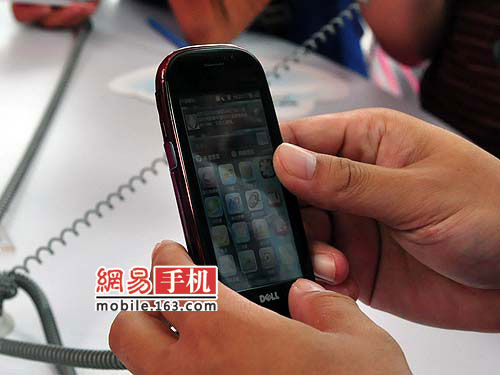 But a Dell spokesperson told Betanews today that the device shown with Dell's trademark at the China Mobile press event was merely a prototype, produced in very limited numbers, and designed specifically to demonstrate Ophone apps at this show using the Ophone Mobile Market. Individuals should not, we were told, jump to conclusions about whether the phone seen at the show will or will not represent anything Dell may sell in the future.

In other words, the spokesperson affirmed to us, this is not necessarily the Dell Mini 3i. That's important, because while on the one hand, it doesn't appear as though this could be anything else, Dell cannot help but be mindful of the fact that the early take on the device was not very positive, or at least underwhelming.

Dell will be cooperating and participating with China Mobile, though the company is making no official announcement about whether that cooperation involves the marketing and promotion of the Ophone Mobile Market -- which, for now, is the only thing it could be cooperating about.