Just about a month ago, Toshiba confirmed it had applied for membership in the Blu-ray Disc Association, and announced its intention to launch both standalone Blu-ray players and BD-equipped notebooks this year.

Today, the company that was formerly responsible for Blu-ray's sole opposition in the high definition disc market unveiled the first details about its Blu-ray hardware.

Toshiba's BDX2000 will be launched in the holiday shopping season, and will support BD-Live, Toshiba Regza-link (HDMI-CEC), Dolby TrueHD, DTS HD audio, and both DiVX HD and AVCHD files can also be played back on the device. Expected to come to retail in November, the BDX2000 will cost $249.99....just $50 less than the Blu-ray equipped PS3 Slim.

Think they'll sell many when they're facing that sort of competition?

At least the The Toshiba Satellite P500 notebook stands a fighting chance. The hefty 18.4" notebook is equipped with an embedded DVB-T TV tuner and "Resolution+" DVD upconversion software and HDMI outs for media enthusiasts "who want to have the creme de la creme," Toshiba said today. It runs on Intel Core2 Duo processors and can offer as much as 8 GB of DDR2 RAM, and can be equipped with either an Nvidia GeForce G210M with 512 MB VRAM or a GT230M GPU with 1GB of VRAM. There's space for 2 HDDs, three USB ports, Express Card, 5-in-1 Bridge Media port, 802.11 a/b/g/n, Bluetooth 2.1 +EDR, and the touchpad supports multi-touch gestures.

Toshiba today said the Satellite P500 will be launched in the fourth quarter of this year in Europe, the Middle East and Africa. There is no word on a baseline configuration cost or whether it will be released in the United States. 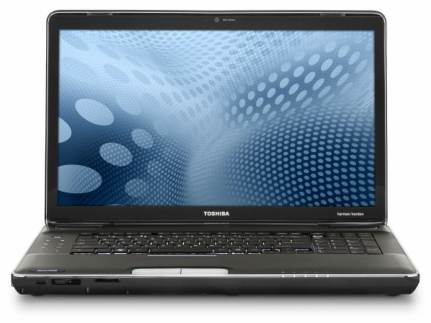