Inside Office Web Apps: Is it good enough to be called 'Excel?' 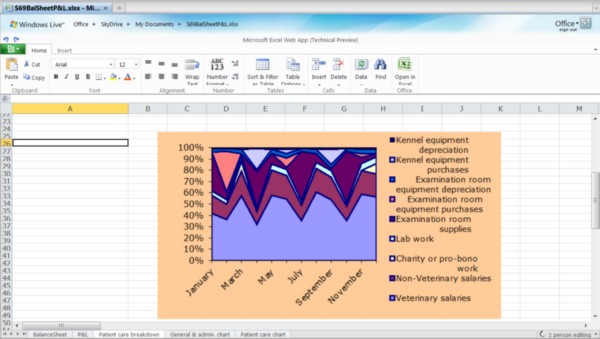 Most businesses I know stopped calling the class of documents that Excel produces a "spreadsheet" long ago, and have deferred to the phrase "Excel sheet," rather than to Microsoft's preferred "workbook." The reason is because the types of data the application now works with have ceased to be exclusively flat and bordered. Excel data is complex, often relational, certainly networked.

So already there's going to be a big distinction that limits anything that portends to be the Excel Web App from being the complete Microsoft Excel. You don't want to bring networked, dynamic, data that's interlinked to data elsewhere in the world, onto the public platform; there are too many risks involved. If you have a complex Excel workbook on your home or business system now where the source of your data lies outside the workbook, don't expect to be able to use it on the Excel Web App.

The question, therefore, is not whether Excel Web App will be something less than Excel 2010, but to what degree. Of the three Office apps made available in the early Office Web Apps Technical Preview launched by Microsoft last Monday, Excel is the one with the most functionality -- which is a surprise, because we had expected it to have been Word. But it's clear that, at least at this point, the Excel Web App is not ready to enable users to create new workbooks from scratch. At this early stage, it includes just enough functionality for you to be able to make changes to the data and enter simple formulas into a workbook that already exists, having been created with Excel 2007 or the Excel 2010 Technical Preview. (You need to create this workbook as an .XLSX file in OOXML format; Office Web Apps will allow you to view, but not edit, Microsoft's older, proprietary .XLS format.)

Although you cannot create a new chart in the Excel Web App, if you already created a 2D chart, the Web App will do its best to render a very good approximation of it, using the standard handful of Microsoft fonts. Some of the more obscure 2D chart styles are actually well-supported in this early version, and although the output looks a little scratchy in this early-going, it's certainly legible. We did notice, for example, that when axis labels are tipped at a slanted angle, the font the Web App uses (or substitutes) will lose its kerning, resulting in some letters that are scrunched together and others that you could fit another letter in-between.

As of yet, 3D chart styles are not supported, at least by this early Technical Preview. But when you do upload to SkyDrive a workbook that contains a 3D chart, the substitute chart that the Web App renders instead uses the same design choices as when you change a 3D chart to a 2D one in Excel 2007, which result in a fair and legible chart, if not particularly elegant. Gradient fill patterns and embedded tile patterns are replaced with solid colors. And we did notice that other embedded elements such as titles and text boxes disappeared.

Microsoft made it a point of noting, on the single test workbook that it supplied for the technical preview, that conditional formatting works. As with charts, there's no way in the Web App to apply conditional formatting to a fresh range of cells, but when such formatting already exists, the Web App knows what to do with it. It's this fact, coupled with the realizations that both the Word and PowerPoint Web Apps are much more capable of displaying existing content features than enabling their creation or editing, that makes one wonder whether Microsoft is planning to make full editing features available to the general user for free. There's a viable argument for not doing so, though the company's silence on this matter suggests it may not have actually made this decision yet.

There are some familiar Excel features that do make a cameo appearance in the Excel Web App:

Some other features, however, either don't work yet or may not be made to work, as the Web App itself explicitly explains they're not functional. Linked elements (as opposed to embedded ones) aren't supported, so if you have an image that isn't embedded in the workbook but instead linked to on your hard drive, for understandable reasons, it will not be displayed in the Web App. Overlaid shapes and graphic objects are omitted as well, along with embedded cell comments (which is a shame, because Microsoft recently began using comments to explain errors in cell formulas). When an uploaded workbook contains unsupported elements, the editing ribbon for that file is often unavailable.

No matter how hard Microsoft tries, there may always be some level of discomfort veteran Excel users have with the Web App, for one glaring reason that is at this point out of Microsoft's control: Right-clicking an object or a cell does not bring up a context menu. A recent blog post from Office Web Apps program manager Elliot Block suggests that his team is working on right-click functionality, including for proofing tools in a future distribution of the Word Web App. But there's a possibility that right-clicking may not work in Firefox and other non-IE browsers, and for many users, that will be a problem.

We were happy to see how well Excel Web App appeared to run through Firefox 3.5.3, although we did notice one major bug that we believe is related to Firefox: No matter how frequently and often we interact with the app, it kicks in the 15-minute timeout notice. We've seen this with other cloud-based Web apps as well (Adobe's Buzzword comes to mind) using Firefox, and we suspect it's related to this glitch here as well.

Once again, the first Web Apps technical preview demonstrates that Microsoft knows how to display Office data online. For these applications to eventually become competitive even with apps such as Google Docs (which we have seen raise "wonky" to an art form), future renditions will need to demonstrate real productivity that users can accomplish remotely and from any browser.

3 Responses to Inside Office Web Apps: Is it good enough to be called 'Excel?'