24 Comments
This is most likely neither the first nor the last article you will read on the subject of Microsoft Windows 3.0. The attention being given the new product is not only deserved, but in many cases carefully orchestrated. The weeklies and fortnightlies have already extolled the merits of Win3's "three-dimensional" buttons, proportional text, and now-boundlessly managed memory. Their gold-star awards have no doubt been bestowed upon the product for being the best in its class, albeit the only product in its class. The "pundits" have already laid blame upon someone for Win3's alleged tardiness to market. The entire story is so well-patterned, it may be read without ever having laid eyes to the printed page.

Yet if we follow the pattern, we miss the real story...

It is May 1990. For several months, reporters had been prepared by Microsoft to cover what was being billed as the most important event in the history of software. It was the beginning, we were told, of the end of DOS, and the birth of a new software "ecosystem" that enabled independent developers to build graphical applications for the first time, without having to jump through the many hoops and stroke the countless egos of Apple. Microsoft would have a hands-off policy in the development of software that supports what was being called, for the first time, the Windows Operating Environment. 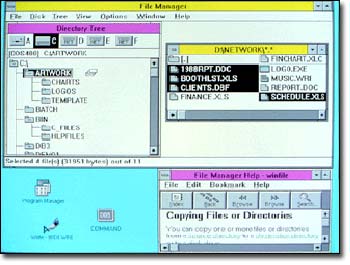 The prospects for applications were boundless, and Microsoft wanted to be seen as opening all the doors and not stepping through them first. The first question in journalists' minds was, would there be a counterpart to Hypercard? Without a Hypercard, Windows may as well be broken. Rest assured, we were told, a company called Asymmetrix would provide the toolkit that would revolutionize programming, with a bit of Microsoft's funding. The next generation metaphors for Windows were being created not by Microsoft but by Hewlett-Packard, for a product called NewWave -- again, Microsoft made certain journalists knew, with its help but not its supervision. And the world would know Windows was for real when it used an everyday spreadsheet with a name familiar to everyone: Lotus 1-2-3 G.

In the spring of the turn of the decade, I had a regular series in a magazine that was widely considered to be "Computer Shopper in exile," called Vulcan's Computer Buyer's Guide, staffed by many former Shopper regulars who would, like myself, become regulars there again once a dispute with the new owners, Ziff-Davis, was resolved. I had the lead role in covering the biggest software release in history, for a magazine whose editors told me flat out, "Use as much space as you need."

Months earlier, Microsoft had granted me some of the first demonstrations of Dynamic Data Exchange ever shown outside its laboratories. It was astounding to me, and I was proposing to write a book on it all, except that none of the book editors at the time knew, or appeared to care, about running two applications at once. "We want a book about Excel or a book about Word," one editor told me toward the close of a conversation. "No one wants to read a book about Excel and Word."

It was uncharted territory, as every editor I worked with kept reminding me. One of these days, my former Shopper editor told me, you'll be writing this story in May and someone on the other side of the screen will read it in May. But for now, it was the August issue we were working with, and complete with interviews with everyone we thought would matter -- Asymmetrix, HP, and Lotus included -- I headed forward for 33 pages of draft copy, with a full head of steam...

Yet if we follow the pattern, we miss the real story. There is a real development taking place between the authors of and for Windows 3.0, which concerns the remodeling of the computer application. We are familiar with the application as a program and its associated data, which is entered and exited like a jewelry store or a bank. We sometimes see ourselves "in" an application, just as we often see ourselves "in" the subdirectory pointed to by the DOS prompt. The data we need while we're "in" the program is much like the diamond necklace behind the display case; we're allowed to look at it and touch it, but unless we're very crafty, we're not allowed to take it outside. It doesn't belong to us, even if the data's very existence is due to our having typed it in.

The entire contraption of the DOS environment -- along with the guilt feelings it so subtly leaves us with -- are being shattered by Windows 3.0. There is a movement under way by Microsoft and its independent software vendors (ISVs) to abolish the structure which grants exclusive ownership rights of a set of data to an application. Having done that, the movement will also seek to dissolve the programmatic barricade which surrounds the once-exclusive application, allowing for the equal distribution of correlated tasks within an arbitrarily-defined computing job, to other programs non-specifically.

It's a difficult concept to discuss in the orchestrated fashion with which we have become accustomed, so instead I offer a hypothetical situation: Assume you have an inventory list card file. You want to compare gross profit percentages, so you demand such a list from the computer. Your spreadsheet -- whatever that may be -- shows you the list. You didn't need to save the card file, translate it, export it, and re-import it -- the list simply appeared. You want to see how these figures look graphically, so instantly you see a detailed pie chart. You'd like to make this chart part of your report to your superiors. This is quite simple to accomplish. Since what you're reading is the report to your superiors, the word processor saw your chart and automatically composed a standard form. This was sent to your typesetting program, which is providing the image you're seeing now.

Your superiors are in six different countries and two of them are out on the road somewhere. you tell your machine to send them all a copy of the report you're looking at now. The machine already knows two of them have fax machines, two are available via WANs, and the other two have cellular phones connected to laptops. You neither know this nor care; you just have your computer "send" the report to them, regardless of the media of transmission. The report is received in six different places, even if the recipient computers' operators weren't using their machines at the time. A mere three minutes of your life have been expended in the processing of the weekly profit report.

You have just been witness to an example of the model for the meta-application -- one smoothly-flowing, correlated process combining the resources of several programs from different vendors. This is the model Windows 3.0 seeks to gradually implement. Actually, this is what OS/2 was supposed to implement at first; its muddled and haphazard development agenda has prevented it from leading the way.

The meta-application is not an inevitable fact of computing; the marketing debacles of cross-vendor cooperation it imposes may render it as ineffective as OS/2 in changing our computing habits. Still, it is something to be wished for. And it is a far more important facet of the Windows 3.0 story than faceted buttons and little pictures. The way in which world industry and commerce works is not affected in the least by faceted buttons and little pictures.