Microsoft may have quite a headache, but the economy finally isn't whacking the company as hard. This morning, Microsoft announced fiscal 2010 first quarter results before Wall Street's opening bell, beating analyst consensus expectations. Mixing metaphors, Microsoft's results don't stink as bad as they have for the last couple of quarters.

Windows 7 is off to a resounding start. Microsoft launched the new operating system yesterday, but PC OEMs have been buying the software for months. During a conference call with financial analysts this morning, Bill Koefoed, general manager of Microsoft investor relations, said that Windows license sales were strongest ever for any single quarter.

Results would have been higher if not for a one-time charge. Microsoft deferred $1.47 billion from fiscal first quarter to the second, because of technology guarantees for Windows 7. People buying Windows Vista PCs were eligible for free or discounted 7 upgrades starting July 1. Without the deferral, Microsoft would have reported $14.39 billion in revenue, for only a 4 percent year-over-year decline, and 52 cents earnings per share, up 8 percent from fiscal 2009 first quarter.

Microsoft stopped offering guidance during fiscal 2009. So Wall Street consensus was solely based on analysts' judgment. Consensus called for a 17.9 percent year-over-year revenue decline, to $12.37 billion. Earnings-per-share estimate was 32 cents, for a 33.3 percent consensus decline. So even without the deferral, Microsoft beat the Street.

Chris Liddell, Microsoft's CFO, described the quarterly results as "strong," during the conference call. He attributed Microsoft's start at revenue and earnings recovery to Windows and Xbox sales and to cost containment. Fiscal 2010 first quarter "might have been the bottom of the economic reset," he said. He predicted real recovery to start in early calendar 2010. 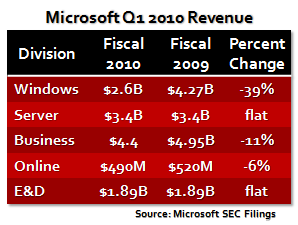 Liddell still didn't offer much guidance for fiscal second quarter, but still more than other quarters:

Microsoft got a little boost by bad news not being worse. Last week, Gartner and IDC released better-than-expected preliminary third calendar quarter PC shipment data. Gartner had expected worldwide PC shipments to decline 5.6 percent, when they instead rose 0.5 percent to 80.9 million units. IDC put PC shipments up 2.3 percent following 6.8 percent and 2.4 percent declines in the first and second quarters, respectively. IDC estimated PC shipments to be 78.1 million units. By comparisons, Microsoft estimates that worldwid, year-over-year PC shipments were flat to 2 percent growth. Sequentially, sales were up in the mid-teens. 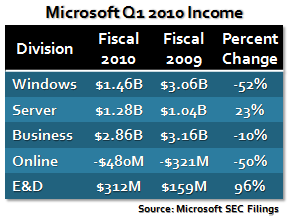 But circumstances mitigated the benefits to Microsoft:

The division derives 80 percent of its revenue from license sales to PC OEMs, which were up 6 percent year over year. However, OEM license revenues declined by 6 percent, reflecting the margin damage inflected by increasing netbook sales. Microsoft estimates that during the quarter, netbooks accounted for 12 percent of PC sales.

Microsoft reported that Windows license sales were strong during the quarter, with sales during September being the strongest for any month ever, in line with the aforementioned record quarterly sales. Robust license sales reflect strong OEM demand for Windows 7. However, as mentioned earlier, the strong license sales could be viewed as OEMs flooding the channel with units that may or may not sell through. Liddell said that OEMs "are buying in anticipation of demand" rather than for "actual demand." Therefore, robust Windows license sales are cautiously encouraging.

Server & Tools. The division is most insulated against economic maladies, because 55 percent of revenues comes from contractual volume-licensing agreements. However, because of corporate layoffs, Microsoft is seeing customers renewing license contracts at lower levels. The division's revenue was flat year over year, while income grew by 23 percent. Microsoft predicted that industry server hardware sales declined 20 percent year over year during the quarter.

Consumer revenue declined $390 million, or 34 percent, which is seemingly counter-intuitive to Microsoft offering deep discounts. Shouldn't revenue increase then? The discounts were for Office Home and Student 2007, which comes with three licenses and sold for less than $90 from some retailers. Presumably, the heavily discounted three licenses-for-one product sapped sales from higher-priced, single-license Office SKUs.

Online Services. Income plummeted by 50 percent. The division's performance, with ad sales in decline, starkly contrasts with quarterly results from Google, which asserted the worst of the econolypse is over. The majority of the Online Services division's sales come from advertising, which fell 3 percent year over year to $421 million.

Entertainment & Devices. Microsoft sold 2.1 million Xbox consoles during the quarter, bringing the install base to about 35 million. Xbox Live revenue grew by 50 percent.

20 Responses to Microsoft Q1 2010 by the numbers: Windows license sales at record levels