I'm going to make a bold prediction: Apple's iPhone will lose the mobile device wars. Such statement will send some iPhone fans howling -- perhaps appropriately so with the full moon days passed and Halloween days away. :)

Put another way: iPhone is to Android -- and somewhat Symbian OS -- handsets as Macintosh was to the DOS/Windows PC in the 1980s and 1990s. The Mac's rocky start in 1984-85 gave way to great success because of several killer applications, with desktop publishing being among the most important. But by the mid 1990s, Windows PCs pushed down Mac market share. The iPhone is poised to track similarly. Gartner predicts that Android OS shipments will exceed iPhone OS by 2012 (see chart). I'm a believer.

The question of how far iPhone can go is important, because a new computing platform is rapidly emerging. Mobile devices like cell phones are sure to replace PCs. PEW Internet claims by 2020. I'm on record as predicting much sooner.

Today, Gartner predicted that this year, worldwide smartphone shipments would grow by 29 percent year over year to 180 million units, exceeding laptop unit shipments. From this year, Gartner predicts that end users will spend more on smartphones than they will on notebooks. The analyst firm expects that most PC manufacturers will move into the smartphone market (where Apple already is with iPhone).

The iPhone's staunchest defenders insist that applications will rule the market. Over the weekend, tech blogger Robert Scoble followed a Twitter debate with blog post: "85,000 reasons why iPhone isn't going to be disrupted." Like many other iPhone enthusiast bloggers or journalists, Scoble believes that iPhone must succeed because of the vast number of applications. In a somewhat terse Twitter exchange, I called him and other die-hard iPhone fans unreasonable. He blogged in response:

If you get me all those, and all the other 85,000 apps, but on a device that is sexier and more fun to use (and more productive) then I'll definitely be reasonable and switch...Until then I have 85,000 reasons to be unreasonable...Yes, I'm unreasonable. Let me know when I can stop being unreasonable! :)

The large number of applications does at first glance seem like a pretty good reason to claim iPhone's eventual domination of what arguably is the next, major computing platform. However, the number of applications is no surefire measure of iPhone's or any other platform's success. Applications are but one -- and not the most important -- platform characteristic. Successful platforms share five common traits:

I usually only put the first four items on the list, but here extend the fifth from the fourth, which is the most important of all. To single out applications as the measure of success is to put the chicken before the egg. Related: The platform chicken-or-egg scenario, where there is question: Which comes first, the platform or the applications? The chicken-or-egg question presumes that many PC operating systems fail because there aren't enough applications; that many developers wait to develop applications because they want to see if the platform will gain momentum among consumer or business customers; that platforms cannot gain momentum if there are not applications. 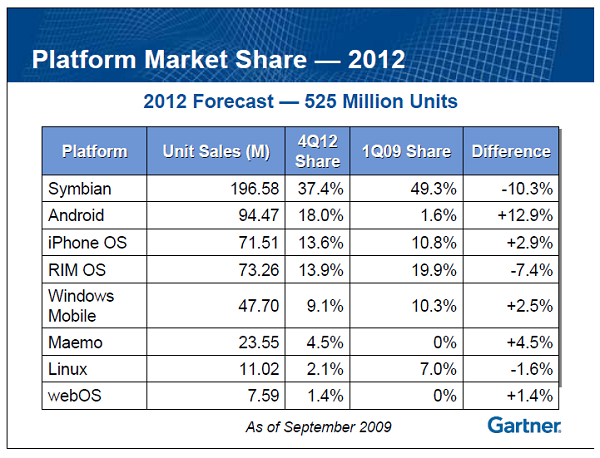 But this reasoning is flawed. It ignores fundamental rules of economics. The chicken-or-egg theorists should ask why do developers wait at all -- or not? My answer: Because they want to make money. The fourth point in my list -- "third parties make lots of money" -- is more important than number of applications. It's the most fundamental reason why platforms succeed or fail. The fifth point --"there is a robust ecosystem" -- is intrinsically connected to the fourth and over the long term is as important, if not more.

The Ecosystem is Everything

Among technology platforms, the Windows PC is classic example of a robust and vital ecosystem. The Google informational/search platform is another. Around either platform, there is a discernible ecosystem of third parties -- not just software developers -- making lots of money. The two ecosystems are broad and deep. By comparison, Apple's App Store/iPhone/iPod touch platform is narrower and shallower, despite the depth of applications, because the ecosystem depends on a closed, end-to-end technology platform. Apple controls everything.

By comparison, in the 1980s and 1990s, DOS/Windows was more open than Mac OS, because Microsoft only controlled the software and Chairman Bill Gates took the brilliant approach of licensing to third parties. (Commenters, please don't huff. I didn't write that DOS/Windows was open, but more open than Mac OS, because of licensing.) Through the licensing scheme, good luck (because of competitors' mistakes) and Microsoft efforts to establish standards around DOS/Windows and DOS/Windows PCs, a robust ecosystem of third-party profiteers emerged.

The ecosystem is everything. Windows Vista's market failure is good explanation why. Vista suffered from perception problems that were much larger than its performance problems; Vista isn't a bad operating system, it just wasn't good enough to displace Windows XP. Vista wasn't just competing against XP but a huge, supporting ecosystem of third parties making money from it -- PC, peripheral and component manufacturers; distributors, resellers and retailers; software and Web services developers; and consumer, enterprise and small business services providers, among many others. XP had five years in the market before Vista's release to build up this broad and deep ecosystem, which also included customers -- many of them large businesses -- dependent on the software to make (or save) money.

What's really interesting about the Gartner numbers (see chart): Windows Mobile declines, but not that dramatically, through 2012. Why? The ecosystem. Microsoft has established a viable Windows Mobile ecosystem that somewhat compensates for the weak mobile strategy. Ecosystem also is one major reason why Symbian OS will remain so dominant, despite steep market share declines. Another: Nokia plans to open source Symbian OS (process is underway). By comparison, Gartner predicts that BlackBerry and iPhone OSes will reach near identical market shares, and, not coincidentally, both are part of closed, end-to-end systems.

Parallels between the past and present foreshadow iPhone's future. The IBM PC launched in mid-1981. About 18 months later, Compaq announced its 12.5 kg clone, nicknamed the "luggable." A year after Compaq started selling its IBM PC clone, Apple announced the Macintosh, in January 1984.

Desktop publishing was the Mac's first killer application, contributing to sales growth over the next five years. But Apple couldn't win the "Clone Wars" against DOS -- and later Windows -- PCs. The resulting clone attack, essentially every other PC manufacturer against Apple, was too much for Macintosh. The PC ecosystem overwhelmed Apple.

Among the three, Google's Android is the one to most closely watch, followed by Symbian OS, assuming publication of source code under open source license is completed next year as planned. While DOS/Windows was more open than Mac OS during the 1990s, Windows Mobile is more closed because Microsoft has failed to establish standards around the software. By comparison, Android, which Google open-sourced, is to mobile devices more like DOS/Windows was to PCs in the 1980s and 1990s: A more open operating system around which third parties make money and an ecosystem thrives.

iPhone Against the World

In March 2009 Microsoft Watch blog post, "The iPhone Platform Comes of Age," I glowingly praised App Store/iPhone/iPod touch. But I tempered my enthusiasm:

Whether or not that platform succeeds depends on many factors. Among them:

Since I raised these reservations about Apple's platform, Microsoft and Nokia fumbled their mobile strategies. Meanwhile, Android is rapidly gaining momentum among handset manufacturers and developers. In a presentation given last week, Gartner analyst Ken Dulaney predicted that Android smartphone OS share would grow from 1.6 percent in first quarter 2009 to 18 percent in fourth quarter 2012 (see chart). By comparison, iPhone OS: 13.6 percent, up from 10.8 percent. Symbian OS will remain dominant, Gartner predicts.

That said, the mobile device market will be bigger than just handsets, which is where Android already is gaining adoption for use on other connected devices. Barnes & Noble's Nook ebook reader and Verizon's Droid phone are but recent examples of where Android is going, and where iPhone is not. Meanwhile, new information published this week shows how Android 2.0 emphasizes information interoperability -- openness that should grow the ecosystem, like DOS/Windows did for PCs decades ago.

Another "everyone else against Apple battle" is coming, with Android looking to be the better OS around which an ecosystem grows and thrives. There's a Star Wars metaphor here somewhere. Apple lost out to DOS/Windows because of the attack of the PC clones. Now the droids are coming for iPhone. Apple's power is the Force -- blogger and journalist enthusiasts like Robert Scoble. Can the Force win? I say no, but you tell me. That's what comments are for.