For days, I've read blogs and news stories misstating Apple's cell phone profitability compared to Nokia. Headlines range from the AppleBlog's "Apple Surpasses Nokia as Most Profitable Cell Phone Maker" to Reuters' "Apple tops phone chart as Nokia, Samsung step up" to Silicon Alley Insider's "Apple's iPhone Operating Profit Beats Nokia For The First Time," among, many, many others. As good as this feat sounds for Apple -- profit share beating market share -- every one of these stories is wrong. Right, everyone is wrong.

Three days ago, Strategy Analytics released report "Apple Becomes World's Most Profitable Handset Vendor in Q3 2009," written by Alexander Spektor. I contacted Spektor this morning for clarification on the report or for an actual copy. He hasn't yet responded. So I have to go by all the misreporting.

Well, hell, that sounds reasonable enough, right? Wrong. Apple and Nokia SEC filings tell a different story. Both companies announced third calendar quarter results a few days apart in mid October. For devices and services, Nokia reported profits of $785 million euros, which is about US $1.1 billion. Apple reported total profits -- that is for all products -- of $1.67 billion in its earnings press release, and later the 10-K filing. I searched the 10-K, and, as I expected, Apple doesn't breakout iPhone profits. 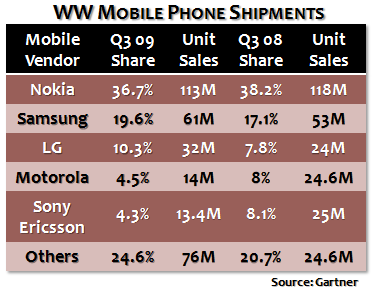 But it doesn't have to for purposes of this discussion. I don't doubt that Apple is more profitable per handset, since iPhone is a smartphone, than Nokia. But the numbers don't add up to Apple's overall handset profitability exceeding Nokia's during third quarter, unless someone is making the bold assumption that all, or nearly all, Apple profits came from iPhone. They surely do not. What? Apple made only $70 million on iPod, Macintosh, retail and software -- $1.6 billion -- on iPhone. No way.

The disturbing lack of fact checking seems to be a trend when it comes to Apple these days. One headline today about Gartner Q3 phone sales data claimed that Apple had closed in on Research in Motion. The reporter later changed the headline after I tweeted that the numbers show RIM extended its lead over Apple (see second chart).

Gartner reported that cell phone manufacturers sold 41 million smartphones during third quarter. Earlier this week, IDC reported that manufacturers shipped 43.3 million smartphones during the same time period. The nearly 2.4 million difference shows still historically low inventory levels -- even for Apple. Based on Gartner's numbers, Apple only had about 400,000 units unsold at the end of the quarter. During its October earnings call, Apple acknowledged that it couldn't ship enough iPhones to meet demand during third quarter. 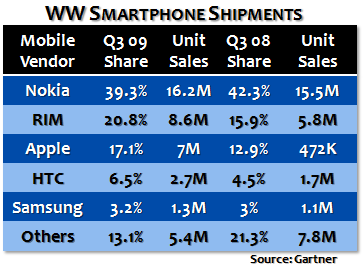 Gartner and IDC put Apple smartphone market share the same -- 17.1 percent -- but RIM's share was much higher based on actual sales: 20.8 percent compared to 19 percent as accounted by shipments. That made RIM's real-time market share even greater than Apple's during Q3.

As for Apple's overall phone profits being higher than Nokia's, don't believe it. Just because dozens of Websites report something as true doesn't make it so. Because of the extent of misreporting, I can't say where the fault lies. The Strategic Analytics report, which again I haven't seen, might have gone no further than present numbers showing that Apple makes more profit per phone than Nokia. That absolutely makes sense. But to assert that iPhone generated $1.6 billion profit during a quarter when all Apple products generated $1.67 billion is simple stupidity.

[Update:: That rascal (I'm being polite) John Gruber has flamed my analysis. Since Gruber doesn't take comments on his site, I'm put in position of defending the analysis here. Gruber uses Apple's non-GAAP (Generally Accepted Accounting Principles) like a club. I quite purposely did this analysis based on GAAP figures, because that's how Apple is required to report them. Of course, I was well aware of the non-GAAP figures, which would add more than $1 billion to Apple profit during third calendar quarter. But like it or not, that money is deferred over eight quarters.

I chose to use the GAAP figures because a) Again, that's what Apple is supposed to report; b) It made for a simpler analysis; c) Apple recognizes previously deferred revenue with the quarterly results; d) According to Apple SEC filings, deferred revenue is for more than just iPhone and Apple TV. The last two points are paramount.

The non-GAAP figure can include previously deferred revenue, which mixes monies taken in during the one quarter with revenue held back from an earlier time. Additionally, not all Apple's deferred revenue is from iPhone or Apple TV. For example, according to the October 2009 10-K filing: "For online sales to individuals, for some sales to education customers in the U.S., and for certain other sales, the Company defers recognition of revenue until the customer receives the product." The third quarter was a big one for Apple educational sales, which presumably includes accounting for rebates offered for iPod touch. Apple doesn't say how much non-iPhone revenue it deferred from third quarter, although that should become clearer when future results are announced.

The point, deferred revenue -- the non-GAAP results Gruber so gleefully trumpeted -- is not so cut-and-dried about iPhone or as explained by his simple math. Lots of companies defer subscription revenue, and that money is counted over time, whether or not Gruber or anyone else likes it. Contractual licensing accounts for 55 percent of Microsoft server software revenue, which must be deferred over 24 or 36 months. No reputable analyst firm compares Microsoft non-GAAP server profits to competitors' profits. But Mac enthusiasts and investors treat Apple differently, for reasons that should be obvious regarding the company's high-flying shares.

I stand by my GAAP analysis. It's the proper way to look at iPhone revenues/profits, for as long as Apple defers a portion of the product's revenue.]

[Update 2: On November 16th, I finally heard back from Strategy Analytics. As I expected, the figures stated for Apple were based on non-GAAP iPhone sales. Strategy Analytics calculated for operating profit, which would be higher than the net profit figures I used.]