Yesterday, Black Friday 2009, I drove 70 miles north from San Diego to Mission Viejo, Calif. My goal: To answer that question. In October, Microsoft opened two retail outlets, in Arizona and California, that do remind of Apple Store.

Tech bloggers, particularly those in the Mac camp, have repeatedly slammed Microsoft for imitating Apple and doing so badly. But as the saying goes, imitation is the best form of flattery -- and imitation is quite common in retail.

"It is not like there are infinite ways of doing retail," Stephen Baker, NPD's vice president of retail analysis, recently told me. "There are prescribed best practices; everybody copies everybody else if something works."

Geekdom seems obsessed with Apple and Microsoft copying each others' products or strategies, with retail stores being but the most recent example. In a November 3rd Betanews comment, reader Viking369 asked: "With more people on the web and tuned into the 'blogosphere,' is the perception of Microsoft copying Apple in terms of stores as bad for the brand as the presence of the stores is good? Does anyone actually know or care outside the geek world?"

My answer to the first question: The stores' presence is more important. To the second question: Probably not. My 15 year-old daughter accompanied me to The Shops at Mission Viejo, where the second Microsoft Store is located. Upon seeing Microsoft Store she immediately observed that it looks like an Apple Store. But she quickly added that Microsoft "could do things to improve" on the store concept. Those improvements are crucial to Microsoft reviving its brand. 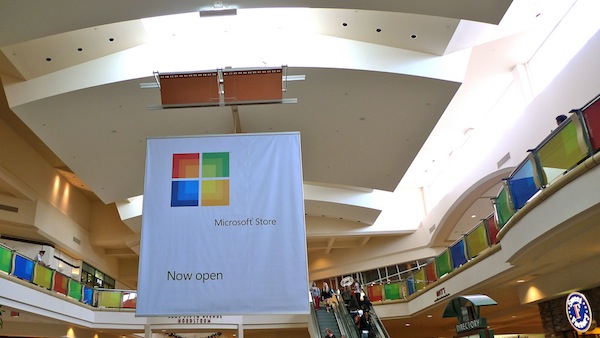 Microsoft's Mission Viejo store is ideally located, and the company has fully capitalized on the advantage. Microsoft Store overlooks the mall's open-air pavilion, diagonally across from the food court, on the upper level. The store is easily visible from either of the mall's two levels. A large Microsoft Store banner rises above the large open space. Microsoft marketing placards adorn the second-level rails encircling the open-air area looking down on the lower level. Visibility is important in retail, and Microsoft Store has got plenty of it.

Like Apple Store, Microsoft's retail shop front is all glass (or perhaps plexiglass) that opens onto low, wooden tables displaying products. The floors appear to be wooden (even if they might not be). The layout is very reminiscent of Apple Store, with products displayed along both walls, as well as tables throughout. Along the left-side back wall there is software; games and gear can be found along the opposite back wall. 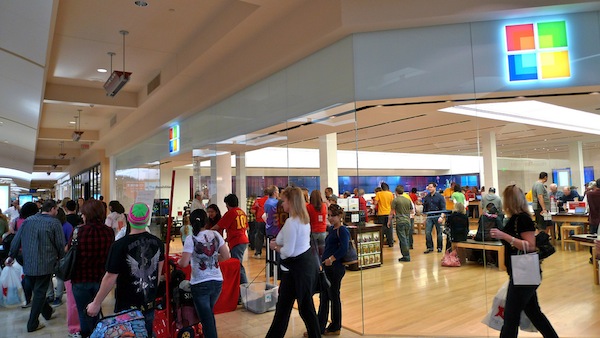 One of Microsoft Store's most distinctive features are video panels that go down the side walls to the back. In an Apple Store, colorful marketing material adorn the walls above products displayed below. By comparison, the video panels allow Microsoft to frequently change the content along the walls.

Down the store's center, towards the back is Microsoft's version of Apple's Genius Bar. There, Microsoft Gurus assist customers with technical service problems. Behind the Guru Bar is another Apple Store knock-off, a theater where Microsoft offers training and other tech activities. 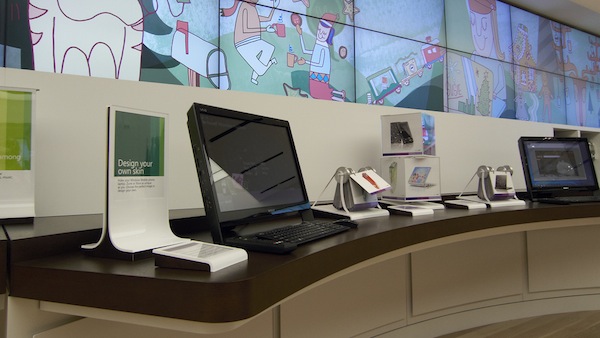 Video panels behind products change marketing messaging throughout the day

In perhaps a sign of how much alike the Apple and Microsoft stores might look to regular consumers, I observed a woman with a MacBook at the Guru Bar early yesterday afternoon. I thought maybe she sought assistance with Macintosh Office. But looking over her shoulder, that's most certainly not what I saw on the Mac's Finder. 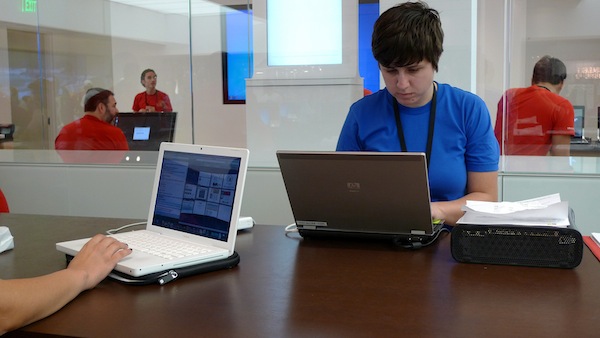 Microsoft Guru Bar is so similar to Apple Genius Bar, customer brings in Mac for service

By the way, I didn't count number of Microsoft Store employees, but there sure were lots of them. Even with the store packed with customers, it felt like a 1:1 ratio between staff and shoppers. (By the way, the photos intentionally don't show many customers, for permission-use reasons.)

Employees at Apple and Microsoft stores wear colored T-Shirts. There is something oh-so original Star Trek about Microsoft Store employees' red, yellow, blue and green T-Shirts. They subliminally add to store staffs' geek mystique. Surely, Microsoft has some unwritten policy that employees must look geek, because every employee at Microsoft Store Mission Viejo surely does. Better said: The staff looks more like normal people, just like the majority of customers. For me, the geek mystique instilled subliminal confidence every employee could answer any Windows PC question. The look is so different from employees working the Apple Store on the same level as Microsoft Store. 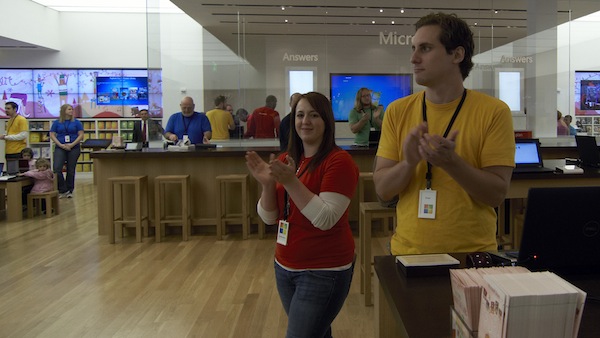 Microsoft is smart to put its stores in malls where Apple has retail shops, too. Microsoft has announced plans to do this, although there is no Apple Store at the Arizona mall -- Scottsdale Fashion Square. Mall colocation creates a sense of competition that is more personal. Employees at one store compete with others several hundred feet away -- if that far. They're competing not just for sales but for customers who will chose one of two different digital lifestyles. The Mac-Windows rivalry coalesces around people working the actual stores, not two ambiguous companies. I visited the Apple Store located near anchor store Nordstrom, for comparison. The energy was much higher at Microsoft Store.

Energy is one thing. Perception is another. Copycat accusations from the geek elite and reach of the social Web magnifies everything that Microsoft does. Example: Microsoft Store line dancing video that appeared online about two weeks ago. Baker and I discussed the video, which led to sneers and jeers from some tech bloggers, particularly in the Mac camp. I pointed out that near the end of the video, customers can be seen dancing with Microsoft Store employees. "That's nice! That's a positive thing that people are connecting with them in the store," Baker said. 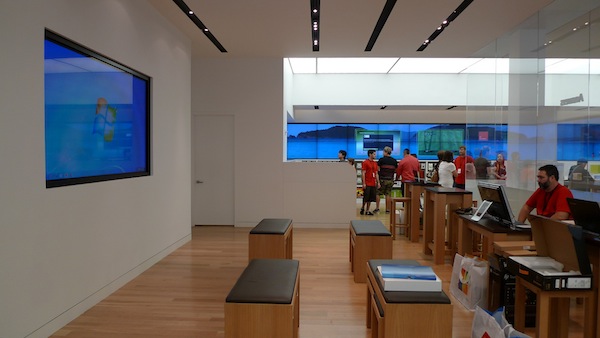 Like Apple Store, Microsoft Store has a theater for training and other tech activities

As I've repeatedly written: Perception is everything in business, and Microsoft struggles to manage perception -- something I got a whiff of yesterday. I told one Microsoft Store employee that all the staff looked to me like real geeks, which set the discussion off on an unexpected tangent. "I just want to feel good about Microsoft," the staffer expressed. The employee clearly understood the mystique following Apple, while among many vocal techies there is disdain for Microsoft and continued copycat accusations. The staffer didn't need say how difficult feeling good about working for Microsoft could be when videos posted to YouTube make the company and its retail store employees look like goofballs.

"They can't get a break," Baker acknowledged. "Everybody turns it into goofy things," Baker said about the line dancing or Windows 7 House Party. I said it for him: They are not. 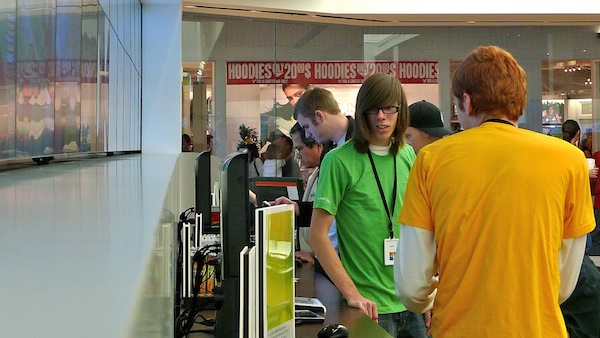 As for Microsoft Store, yes, it is an Apple Store imitation. But is it a bad imitation? No. Is imitation a bad thing? No. It's what retailers do. I enjoyed my visit to Microsoft Store. I hope Microsoft opens plenty more stores and nearby to Apple shops. The competition will make computer shopping better for everyone.