Fee or free? Murdoch, Huffington square off over the cost of Internet news

The problem remains: How can a business be profitable at producing news for the Internet audience when the principal method for ensuring that the news is visible to that audience, is a free system? The US Federal Trade Commission could not have chosen two more appropriate representatives of the opposite poles of this issue than News Corp. Chairman Rupert Murdoch and mega-blog editor Arianna Huffington, to head its public workshop in Washington yesterday on the subject of the future of the online news industry.

In one corner stood the world's largest producer of financial news, currently afflicted with the problem of its core product becoming publicly disseminated in a manner that bypasses its mechanism for charging for it. In the other corner is arguably the Web's most successful blog publisher, who argues that the free Web is merely the new, permanent reality, and that the long-term solution to the profitability problem is to empower "citizen journalists" with the impetus to produce original journalism for little or no compensation.

Murdoch led off his speech to the FTC by reminding the audience of the collective power of News Corp.'s many brands, which now include Fox, Sky, and Dow Jones. Those brands, he believes, help establish a foundation of quality to which his customers will naturally attribute monetary value.

"We believe fiercely that the key to competing during difficult times is to invest more in journalistic content, not less," Murdoch said. "Quality content is not free. In the future, good journalism will depend on the ability of a news organization to attract customers by providing news and information they are willing to pay for."

By anyone's measure a very skilled businessperson, Murdoch invoked "simple arithmetic" to demonstrate that no online publisher can survive on advertising revenue alone, especially if it also continues to maintain a print publication. Ad rates for print continue to plummet, he demonstrated, though the rise in ad rates online is not -- and will not -- rise to compensate. 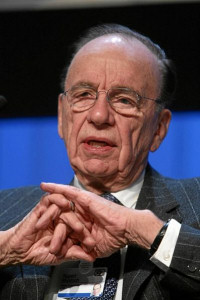 "That's not going to change, even in a boom," remarked Murdoch. He conceded that the old print business model could not be sustained in the face of online alternatives. "The reason is that the old model was founded on quasi-monopolies such as classified advertising -- which has been decimated by new and cheaper competitors such as Craigslist, Monster.com, CareerBuilder.com, and so on. Even online display advertising is in such huge supply that its price is under constant pressure."

"In the new business model, we will be charging consumers for the news we provide on our Internet sites...The critics say people won't pay. I believe they will, but only if we give them something of good and useful value. Our customers are smart enough to know that you don't get something for nothing."
Outside of the Dow Jones wall, however, lies another class of people who are clearly not News Corp. customers. These are the aggregators whom Murdoch distinguishes both from paying readers and from salaried journalists.

"Some rewrite, at times without attribution, the news stories of expensive and distinguished journalists who invested days, weeks, or even months in their stories, all under the tattered veil of 'fair use," the News Corp. chairman explained. "These people are not investing in journalism. They are feeding off the hard-earned efforts and investments of others. And their almost wholesale misappropriation of our stories is not 'fair use.' To be impolite, it's theft.

"Right now there is a huge gap in costs. Technology makes it cheap and easy to distribute news for anyone with Internet access. But producing journalism is expensive. Like all good news organizations, we invest tremendous resources in our products, from our newsrooms and studios and cameras and computers to the salaries for the reporters, editors, producers, directors, writers, on-air talent, and countless other employees who contribute to producing a newspaper or newscast. When this work is misappropriated without regard to the investment made, it destroys the economics of producing high quality content. The truth is that the aggregators need news organizations. Without content to transmit, all our flat-screen TVs, computers, cell phones, iPhones and BlackBerrys, would be blank slates."

For her part, Arianna Huffington began her retort to the FTC workshop yesterday with a rather long reminder of all the more colorful metaphors Murdoch and others have used to describe both her class of business and the aggregators who depend on it. If such folks go on and on about how she must be doing something wrong, her point appeared to be, she must be doing something right. Which made Huffington's opening remarks, at one level, not at all unlike Murdoch's.

But after several paragraphs of bluster, Huffington finally got to her point, paraphrasing Winston Churchill's famous metaphor (which should actually be attributed to Will Rogers) by saying the Internet news model may be bad, except for everything else that's worse. She cited Stephen Brill's recent venture (to which News Corp. has contributed) to establish "pay points" or electronic turnstiles for extracting fees for article reads; and The New York Times oft-delayed move into erecting a "pay wall" at some point on its Web site, probably behind the front page. 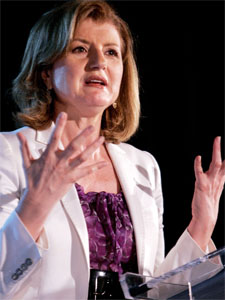 "It amazes me that Murdoch and Brill and the paywall team at the Times continue to believe that people are prepared to pay for news online, despite the recent survey showing that 80% of US news consumers say they wouldn't bother to read news and magazines online if the content were no longer free," remarked the Huffington Post publisher. "Sure, free news content is not a perfect system but it's a lot like what Churchill said about democracy: it 'is the worst form of government except all the others that have been tried.' That's the reality. Free content is not without problems. But it's here to stay, and publishers need to come to terms with that and figure out how to make it work for them."

In the new system of news whose portrait Huffington painted verbally, the front page of newspapers is now where news goes to die. Real news, in the modern world, is generated socially, by human interaction -- or at least, with people who believe they're texting other people through the Internet. When countries experience the threat of violent overflows, nobody needs to pay a journalist to tell the story of what it's like to be afraid of dying, when so many citizens out there are willing to do that for free.

"The contributions of citizen journalists, bloggers, and others who aren't paid to cover the news are constantly mocked and derided by the critics of new media who clearly don't understand that technology has enabled millions of consumers to shift their focus from passive observation to active participation -- from couch potato to self-expression," she told the FTC workshop. "Writing blogs, sending tweets, updating your Facebook page, editing photos, uploading videos, and making music are just a few of the active entertainment options now available. But when the data began to show a significant shift in consumer habits, traditional media responded by belittling Web journalism."

The Huffington Post has established a fund to compensate more seasoned investigative journalism, she noted, but that fund can perhaps grow collectively like the contents of a Salvation Army red kettle. Still, not everyone needs this charity because they're quite willing to share their experiences openly -- thus, Murdoch's arithmetic only fails to break even as long as publishers consider content as an investment.

"The same people who never question why consumers would sit on a couch and watch TV for eight hours straight can't understand why someone would find it rewarding to weigh in on the issues, great and small, that interest them, for free. they don't understand the people who contribute to Wikipedia for free, who maintain their own blogs for free, who Twitter for free, who constantly refresh and update their Facebook page for free, who want to help tell the stories of what is happening in their lives and in their communities, for free...To deride the value of their contributions is to completely misunderstand the world we live in."

13 Responses to Fee or free? Murdoch, Huffington square off over the cost of Internet news