For years, analysts have opined about the iPod "halo effect" on Mac sales -- the idea being that people buying iPods who enjoy the experience and exposure to the Apple brand will be more likely to buy Macs. Mobile platform analytics firm Flurry, which data I am using for the first time, claims there is a second halo effect -- iPod touch to iPhone. Flurry puts some hard, and quite believable, data behind this assertion.

"While the Android platform is the most legitimate challenger to iPhone smartphone dominance, it's important to remember that the iPhone's flank is protected by an often overlooked, powerful fighting brand: iPod touch," Farago writes. He notes that Apple has revealed 58 million iPhone OS devices sold -- shipped, really -- through September 2009. "Of those, Flurry estimates that just over 40 percent, around 24 million, are iPod touch devices," he continues. "While it is clear that the iPhone has significant short-term revenue value for Apple, Flurry believes that the iPod touch holds more long-term strategic value for Steve Jobs and team."

Farago certainly isn't the first person to suggest that Apple's mobile platform should be regarded as iPhone and iPod touch, since they use the same operating system. But he makes a connection to younger users, putting forth data to back up the claims (the charts here are those Flurry provided in the blog post). He writes:

Apple is using the iPod touch to build loyalty with pre-teens and teens, even before they have their own phones (think: McDonalds' Happy Meal marketing strategy). When today's young iPod touch users age by five years, they will already have iTunes accounts, saved personal contacts to their iPod touch devices, purchased hundreds of apps and songs, and mastered the iPhone OS user interface.

This translates into loyalty and switching costs, allowing Apple to seamlessly 'graduate' young users from the iPod touch to the iPhone. For OEMs hoping to challenge Apple, we believe an even greater sense of urgency must be adopted.

Lock-in is an approach long used by many capitalists. Microsoft crafted lock-in into a science during the 1980s and 1990s, by establishing de facto standards around DOS/Windows protocols and file dependencies coupled with proprietary application file formats. U.S. trustbusters claimed Office-Windows created an "applications barrier to entry" that thwarted competing products. Maybe, but those so-called dependencies also improved business productivity and communications, by reducing the number of disparate file formats -- and applications needed to read them -- and by diminishing operating system fragmentation. 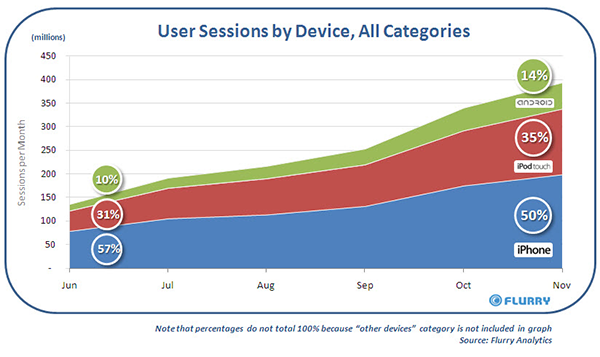 Microsoft's big lock-in advantage was less about its technology and more about human behavior and business logistics -- as measured in switching costs. People develop habits they are slow to change. Any IT manager bringing in new applications or processes can attest to the human switching costs, where employees resist adopting something new. The other switching cost is logistical, when there is a high cost switching from one platform or product to another. Microsoft competitors face these costs when trying to get businesses to move to free, open-source software. Even Microsoft struggles with switching costs, when businesses hold fast to older Office or Windows versions because of costs associated with upgrades.

If Apple can lock in younger users now, future switching costs, familiarity with iPhone OS and fascination with the Apple brand could turn millions of iPod touch users into future iPhone users. Marketers dream of locking in users young so they will be customers as they grow older. Cigarette marketing has repeatedly come under fire for allegedly marketing to kids. Microsoft has long deeply discounted software for the college and university markets, hoping to lock-in future customers.

There's another factor, which Farago only indirectly considers: Generational behavior. Sociologically, generations aren't just about time of birth. Each generation has clearly defined characteristics that distinguish it from others. Today's tweens and teens are at the end -- and a little beyond -- the Millennials, which are sometimes referred to as Echo Boomers or the Net Generation. Millennials are highly social, more likely to take buying and fashion cues from their peers than advertisers. Farago rightly observes that today's tweens and teens fall into an even more social group:

Anecdotally, we know the 'iPod Touch Generation' is made up of heavy MySpace, Facebook and SMS users, who voraciously share their lives with, and influence their ever-expanding social graph. Importantly, this also includes promoting products they like. Empirically, Flurry compared how iPod touch session usage has changed over the last six months across key application categories important to this demographic; namely, social networking and games.

Certainly, several analyst studies -- and declining Nintendo DS and Sony PSP sales and Nokia's discontinuation of N-Gage -- identify iPod touch as a gaming device growing in popularity. The games tweens and teens buy today, they'll want to take with them to their cell phone. Apple's DRM, formats and technologies will make iPhone a top priority for many members of the iPod touch generation. If influence matters, friends will want to belong to the same iPhone club. If social networking apps are better on iPhone OS, the iPod touch generation will want these, too. 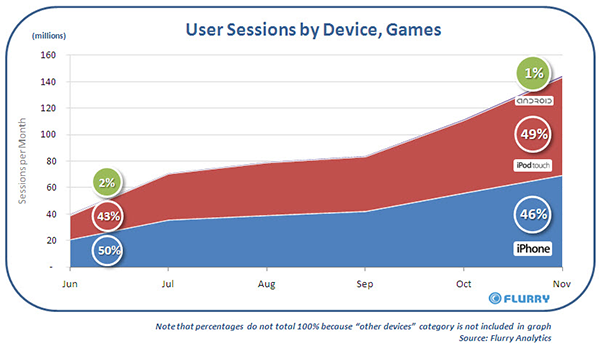 All of this is made possible by a key technology decision made by Apple that I blogged about in February. Before iPhone launched in June 2007, wireless carriers generally controlled mobile operating system updates. The resulting fragmentation created a barrier to mobile applications development. With iPhone and iPod touch, Apple controls and distributes the updates, creating a single platform across many devices. So those 58 million iPhone OS devices are a single platform, something no other mobile operating system developer can claim about its products.

In October, I blogged that "Apple will lose the mobile device wars." But Apple may yet win the mobile platform wars. At the least, if Flurry's analysis proves right, today's tween and teen iPod touch users may be tomorrow's iPhone users. Assuming they buy a computer, too, it could easily be a Mac and Windows PC. Hey, if one Apple, why not a bushel?