What does AT&T's 'Mark the Spot' app say about service quality?

Do you have AT&T as wireless carrier? Are you happy with the network service quality? I encourage Betanews readers to respond in comments to these questions, which are suddenly surreal now that AT&T has released the "Mark the Spot" app for iPhone. There's something comical about an app that tells AT&T about its connection problems. The app also is tacit admission that AT&T has voice service problems. Surely for some greedy lawyer, there's a lawsuit for that.

Some readers will ask why post a commentary like this one. What's newsie about whacking AT&T aside the head for its well-publicized service problems? Answer: Most of us here -- me writing and you reading -- are gadget freaks. Many American Betanews readers use iPhone, for which there is only one official carrier choice: AT&T. In that context, bad service is a problem. Additionally, it's the holidays, when some people give the gift of phone. Since most dumbphones and smartphones are sold subsidized and locked to a single carrier, network should be considered in any handset purchase.

By the way, I want to make a distinction about two different kinds of service: Voice and data. There are plenty of complaints about AT&T calling problems, but I don't read (or hear) nearly as many about data quality. There, AT&T might just deliver. So I ask commenters to make a distinction between data and voice in answering the question: Are you happy with your AT&T service?

If the January 2010 issue of Consumer Reports is any measure, U.S. cell phone users are happier with the other three major carriers. In CR's survey of "3,257 respondents who had prepaid service," AT&T ranked last, with a score of 66 out of 100. Top-ranked Verizon scored 75. AT&T got a black circle, meaning worse, for voice. In San Diego, where I live, AT&T scored 64. Verizon's lowest score in any of the 26 metropolitan areas was 72.

I became an AT&T Wireless subscriber when it rolled out GSM services more than a half decade ago. Cingular later acquired AT&T Wireless, which later became AT&T following another merger. I had generally been satisfied with the service, both in San Diego and Washington, D.C., until about six weeks after Apple launched the iPhone 3G in July 2008. Service quality tumbled, seemingly overnight. Calls regularly dropped on three different iPhones through autumn 2008. My wife insisted on my returning her iPhone during the 30-day grace period for refund. She switched back to the Nokia N95.

In the early days of service problems, I blamed iPhone for the connection problems. But after months of tests using other handsets, I found calling problems to be persistent, although not as severe, on them all. Overall call quality was noticeably better on HTC and Nokia handsets than iPhone, and calling problems were frequent just not unbearable.

But all that changed again in summer 2009. Ahead of the June iPhone 3GS launch, AT&T service actually improved, only to return to its wicked, dropped-calling ways by August. My service quality went all to hell after AT&T opened up MMS to iPhone customers. I started experiencing dropped connections on most calls, and failed connections went from annoying to unbearable. 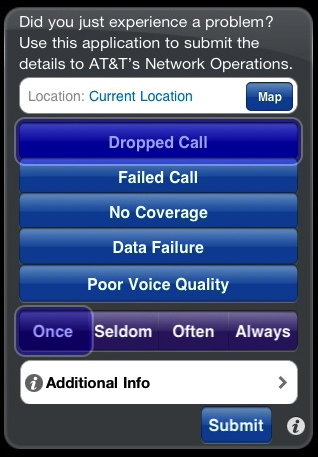 After six years as an AT&T customer, I switched to T-Mobile in October, days before the carrier introduced unlimited voice, data and texting plans. My reason for giving up AT&T: Relentless calling problems. In the nearly two months since switching carriers, I have had one dropped call and two failed connections, both on the same day last week. The calling consistency is simply liberating.

But leaving AT&T meant dealing with broken contracts. In California, carriers must prorate rate the fee, which is $175 per line for AT&T, based on time remaining on contract. Among my four lines, only one was out of contract. AT&T and I haggled over the remaining fees, which I disputed because of my reason for leaving. In the end, AT&T discounted my final bill by one's month service fee, which brought my contract-breaking fee to around $200.

There's more I'd like to say about my satisfaction with T-Mobile, but I don't want to turn this post into an advertisement for the carrier or for it over AT&T. Verizon conistently ranked No. 1 in the Consumer Reports survey. But I can't let AT&T off so easily, either. I'm a fan of telecommunications student Trent Sense's blog. He changes handsets more often than I do. Sense also switched to T-Mobile, in November, and he writes:

AT&T is due for some hard times in the coming future if it doesn't totally focus on improving the infrastructure of its 3G network. Dropped calls at home and a lack of comparable plans are what caused me to eventually choose TMobile and make the most of my money.

All this comes full circle back to AT&T's new "Mark the Spot" app, which essentially marks where your service went to hell and tells the carrier all about it. From one perspective, AT&T deserves praise for providing an app that can help identify troubled services areas. But from marketing and public relations vantage points, the app is potential disaster. Now subscribers will be reminded by this app every time there is a calling problem -- and somebody at AT&T thinks that's a good thing? Better approach: Offer a background service (for shame, on iPhone?) that silently notifies the carrier of problems, after subscribers agree once to the information being sent.

If comments on the app at iTunes App Store are any indication, "Mark the Spot" could do much PR harm -- that even with a majority of five-star ratings. Commenter Kovanen, who rated the app five stars, complains: "The AT&T network is just consistently terrible!" The commenter wants to take the iPhone to Verizon. "You have no service on AT&T and you're expected to notify AT&T of no service on AT&T with an app that needs AT&T service to let them know there's no service on AT&T," writes App Store commenter Marin Princess. Many other commenters did acknowledge the app as a good step forward, but several others thanked Verizon for putting competitive pressure on AT&T. The point: AT&T listened more to Verizon than to its own customers.

Now it's your turn. Are you satisfied with AT&T service? If you switched from another carrier, how does it compare? I've told my story, and I should emphasize that switching was a hard decision. I was satisfied with all other aspects of AT&T service. How about you?

71 Responses to What does AT&T's 'Mark the Spot' app say about service quality?