Google Nexus One phone rumors show the power of buzz

Rumors and scattered confirmations that Google would sell its own, branded Android-powered phone are seemingly everywhere this weekend. The noise is so loud as to essentially quiet persistent rumors about an Apple tablet. That alone is some feat. The buzz reminds me of the rumors before Apple announced the iPhone in January 2007. Cover your ears. The noise is deafening.

The rumors don't need to be true. The buzz is benefit enough to Google. Buzz like this -- the kind Apple has commanded for years -- creates an aura of innovation about a brand, raises higher a brand's profile and, for a public company, lifts the share price and analyst evaluations. Also, the rumors break during a typically slow news cycle -- the holidays and ahead of the Consumer Electronics Show in January -- further heightening the buzz. For the last several holiday seasons it was Apple buzz building during the holidays. Now it's Google.

Rumor buzz tends to be the most tantalizing and generates the most blog posts or news stories, because there is so much speculation and investigation going on; geeks love a good mystery. What is known: Secret Santa handed out a smartphone running Android 2.1 to many Google employees. Yesterday at the Google Mobile blog, Mario Queiroz, vice president of product management, confirmed the act. "We recently came up with the concept of a mobile lab, which is a device that combines innovative hardware from a partner with software that runs on Android to experiment with new mobile features and capabilities, and we shared this device with Google employees across the globe," he wrote. "This means they get to test out a new technology and help improve it."

This also means that Google isn't sharing any details, "because dogfooding is a process exclusively for Google employees," he emphasized. "We hope to share more after our dogfood diet." Perhaps that's the official line, but Google employees just couldn't keep their Twitter traps shut. They extolled the handset's virtues -- 140 characters at a time -- and posted Twitpics for your rumor-salivating pleasure.

Then there is the seemingly authoritative confirmation that Google will offer a smartphone on a BYOC -- bring your own carrier -- basis. The Wall Street Journal cites unnamed sources claiming Google will sell a branded, unlocked phone made by HTC that will be called the Nexus One. Based on the leaked pics, assuming they're not fakes, the Google phone is a variation on the HTC Passion.

The Nexus of Rumors

The Journal's Jessica Vascellaro writes that Google is "designing a phone without working with the wireless carriers that often dictate what features they allow on their networks." She adds: "The move could alienate wireless carriers and handset makers that offer Android phones and do not want to compete with Google. Google has repeatedly said that its goal is to have hundreds of Android phones rather than one." 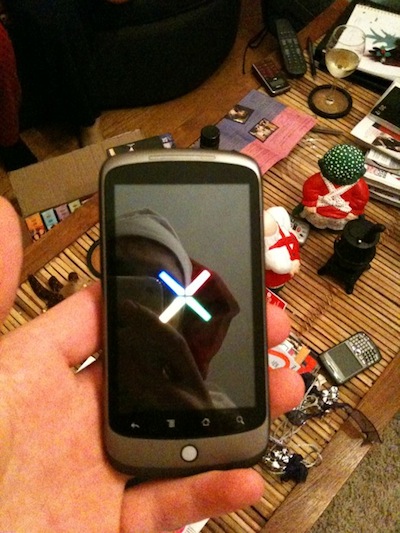 From Twitpic: Google's rumored new phone? Is it for real?

Vascellaro misses two obvious facts: Apple and not carriers dictated the design of iPhone and Nokia has sold unlocked phones for years without alienating carriers. Google risks little to nothing by releasing its own branded phone; carriers won't walk away just because of the Nexus One, assuming it's real and that's the name.

By the way, Nexus One is a crappy name. It has no brand appeal, although the name is descriptive enough to reveal what Google's broader mobile objectives will be for the rumored device. By dictionary definition, nexus is the center of a connection or link, singly or to a group. Presumably, the Nexus One will synchronize Google cloud services to the device -- something Android 1.6 and 2.0 smartphones already do today. But Google will solely be the center, not carrier software or skin UIs like the HTC Sense or Motorola MotoBlur. Nexus also implies enabling social connections, which already are better enabled by both custom UIs and Android 2.0.

The rumored Nexus One also would allow Google to establish baselines for third-party Android phone development and for operating system uniformity. Apple rewrote handset rules by taking control of software updates, rather than letting carriers distribute them. As such, iPhone is a uniform development platform. For Google, carrier and hardware manufacturer customization and uncoordinated software updates risk fragmenting Android. I have a T-Mobile MyTouch running Android 1.6, while the newer Verizon Droid runs v2.x. It's unclear when, if ever, T-Mobile will offer v2.x for MyTouch.

Google Phone Is Not Game Changing

More broadly, a phone sold directly by Google isn't as game changing, as some pundits are claiming this weekend. At Gizmodo, Matt Buchanan leads the ridiculous game changing charge:

It's hard to understate just how radically this changes the landscape not just for Android, but what it means for Google and their relationship to the cellphone industry. The Google phone would be a radically different model, a shift from the Microsoft one -- make the software, let somebody else deal with the hardware??"to the Apple and BlackBerry one -- make the software and the hardware, tightly integrated. And Google's even taking a step further, by selling it directly, bypassing the carriers, at least initially.

Statements like Buchanan's show just how badly buzz can distort the thinking of geeks and gadget freaks (They're all oogled-- or is that Googled-- eyed about Android 2.1, I guess). A Google phone is not game changing. Buchanan's game changing idea partly describes Nokia's longstanding business model. Granted, Nokia is a hardware manufacturer. But Nokia licenses Symbian OS, which is mostly open source. Samsung and Sony Ericsson both sell Symbian-based phones. Additionally, Nokia sells unlocked phones directly to businesses or consumers; BYOC. Nor is a Google-branded phone different branding. For example, my MyTouch clearly has Google's brand on the back.

But there is something game changing: The rapid pace of Android OS and Chrome browser development strongly suggest that the days of everlong Google betas are gone. Granted, Google got Android in a 2005 acquisition. But the first Android phone only released to the public in late 2008, as did Chrome. Now Google has pushed past Android 2.0 and is working on Chrome 4.0. That's an amazing pace for any developer, but much more so for one that kept Gmail in development for about five years.