There is so much buzz about Apple's rumored tablet, Santa Claus landed back in Cupertino (the Mac maker's Calif. headquarters) instead of the North Pole. Not that he found anything more than a lump of rumors packaged like a real present. Poor Santa. He's not the only person being fooled. The Apple tablet buzz stinks of blog and news media manipulation and quite possibly stock manipulation -- not that the latter is new for the goings on around Apple. Sadly, bloggers and journalists are too willing to be manipulated by people leaking information.

The state of the news media, fueled in part by SEO -- search engine obsession, ah, optimization --- where the story or post first and flawed is better than second and straight-up, favors gossip and rumors to drive pageviews. Nothing has to be true, as long as the post makes the top of Google News. Unnamed sourced stories and ancient domain registrations are the new news. So it is with Apple's iSlab -- surely not its name but good enough for this bitchy commentary.

How strange is the coincidence -- the number of Apple tablet news stories and blog posts coming this past week, the juiciest ones popping on December 23 and lifting Apple's share price to new heights. Dan Frommer blogged at Silicon Alley Insider: "Apple is preparing to show off a new, larger mobile device with a higher resolution display in January -- probably a version of the Apple tablet we've been hearing about for months -- according to a plugged-in source in the mobile industry."

Who wouldn't believe the unnamed "plugged-in source," eh? In a separate post, just 80 minutes later, SAI's Jay Yarow further treated rumor as fact: "Apple's tablet, which is expected to be unveiled in January, won't be a huge growth driver for the company next year." He referred to yet more news from Apple bizarroland. In a research note, Piper Jaffray analyst Gene Munster predicted Apple would sell 1.4 million tablets in 2010. Excuse me, but what tablet? Apple hasn't announced squat. Oh, yeah, that number is based on $600 pricing, something else Apple hasn't announced.

Same day, the Financial Times Tech Blog pulled off some seemingly sleuth reporting (or was it leaked?). David Gelles wrote about Apple renting the Yerba Buena Center for the Arts, which is in San Francisco, near the end of January. Gelles cited unnamed sources about the renting and a "major product announcement on Tuesday, January 26th." 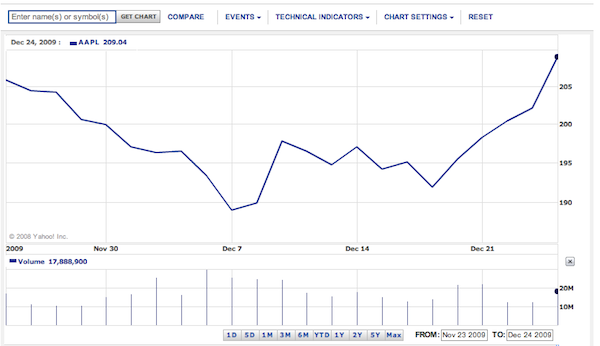 Scathes of blogs connected the rumored event with the rumored tablet -- that the two must intertwine. Apple must be announcing its tablet on January 26. More supposition and conjecture suddenly became fact.

When one of my colleagues here asked if the rumors of the Apple tablet were true, and when we could expect such a device, the response from his source was, 'I can't really say anything, but, let's just say Steve is extremely happy with the new tablet.' Yet another recently departed Apple employee tipped me: 'You will be very surprised how you interact with the new tablet.'

Interesting reporting, the second-hand sourcing: My friend's acquaintance said "Blah, blah, blah," so it must be true. On the basis of this sourcing -- and a few other "signs," Bilton asserted: "I have no doubt that Apple will release a tabletlike device in 2010."

On Christmas Eve, bloggers figuratively fell over one another to feed the rumors for more pageviews. Late on Christmas Eve, Arnold Kim proclaimed that "MacRumors has found evidence that Apple acquired the domain name iSlate.com presumably in preparation for the new device." Kim and MacRumors (with help from "Mark Gurman from AppleRejectedMe.com") did some arguably good sleuthing, but that "in preparation for the new device" is quite the leap. MacRumors reported that Apple acquired the iSlate.com domain in 2007. But somehow, "given this evidence 'iSlate' seems a likely candidate for the device's name." Really now?

The voice of reason came December 20 and three days before the FT, SAI and Times blog posts. Journalist Ian Betteridge astutely quoted from another blog: "I have no less than 5 sources saying an Apple tablet announcement is due soon." Betteridge observed the post was from 2005! "What it goes to prove is simply that Apple tablet rumours have been around a very, very long time," he wrote. "Nothing came of the ones from 2005, and it's perfectly possible that nothing will come of all the current round of rumours as well."

Did Someone Manipulate Apple Shares?

But something has come from the rumors: More buoyancy to Apple's share price, which reached a new high on Christmas Eve, closing at $209.04. Christmas brought a slate of iSlate presents -- ah, blog posts -- to the InterWeb and perhaps to Apple's share price come Monday when stock markets reopen. [Update: Apple opened on Monday at $2 more than Thursday's close, reaching a new high of $213.95 in early trading.]

At this point in writing this post, I stopped to search my RSS feeds for "iSlate.com," and found Engadget also had posted (yesterday) about Apple's soaring share price. Ross Miller blogged:

It seems everyone decided to spend their holiday bonuses on some Apple shares. Now, we're not claiming to be professionals here by any stretch of the imagination, but it seems a lot of the activity here can be attributed to the recent flux of rumors.

From November 23, Apple shares started a steady decline from about $206 to around $189 on December 7. On December 17, after a brief rise, Apple shares reached their second bottom for the month, around $192. A series of spikes followed, perhaps not surprisingly tracking with news about Mac and iPhone sales projections and Apple tablet rumors. From December 17, the share price rose sharply as tablet rumors increased, such as leaks about possible content deals and private developer briefings. These rumors lifted Apple shares over the next six days from $191.88 to $202.10 on December 23. On Christmas Eve, the shares spiked about $7 more, to the aforementioned $209.04 close.

Please forgive my eggnog-induced, conspiracy-theory thinking, but don't ignore it. A number of unnamed source(s) leaked to SEO-obsessed blogs about an Apple event and possible tablet all around the same time -- and during the holidays, when there is less business or tech news to report and senior staff might be vacationing. Perhaps it's no coincidence that financial analysts or blogs sourced these unnamed people. Gasp -- did someone try to lift Apple's share price higher? Or maybe it's all a great coincidence, or the most amazing feat of simultaneously good reporting?

I'm not asserting that Apple won't soon announce a tablet. I am claiming not to know, and that most of the rumors are coming from people who also don't know. They're guessing, and their guesses aren't facts. With that I have to ask: What do you think of these rumors and, in context, Apple's rising share price? What about the rumored Apple tablet? Should Apple release one at all?

40 Responses to Are Apple stock price gains the reason for recent tablet rumors?