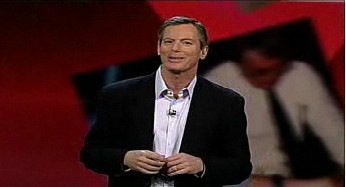 In his company's first-ever keynote address to the Consumer Electronics Show Friday morning, Qualcomm CEO Dr. Paul Jacobs made a kind of prediction that appears, given his position, to inevitably become a self-fulfilling prophecy: As consumer electronics devices throughout the home, mobile space, and workplace become endowed with systems-on-a-chip that are based on wireless phone reference designs, almost everything with an on-switch will inevitably become, at its core -- whether it's used for that purpose or not -- a telephone.

"Those same chips that we put...into the cell phone, those chips are now going to go into the consumer electronics devices themselves," Jacobs told attendees. "So we believe that consumer electronics devices are essentially going to be phones inside. I mean, they'll look different, right? Different shapes, different sensors, different buttons, a little different software. Fundamentally, inside though, they're going to be cell phones, I think. And it's Qualcomm that's helping to drive that innovation."

Perhaps for the third consecutive year, "the story of CES" -- the talk that's generating news among attendees, including through Twitter -- is coming from a freshman source. Comcast was the story two years ago, with its "TV Everywhere" move for everything, all-the-time -- more of a general direction-setting course than an initiative, however, which led it to commence a buyout of NBC Universal. Palm was the story last year -- the comeback of a once-loved player in the industry, with a compelling device.

Jacobs reminded the audience that Qualcomm helped put Palm on the map with what he described as the "first smartphone" -- the 1999 Palm pdQ, described by the few who used it as a Palm grafted onto a cell phone. By driving innovations in later years such as endowing the smartphone with a Web browser -- something else Jacobs takes credit for on behalf of Qualcomm -- he stood before the CES crowd to proclaim that the cell phone (at some level a Qualcomm invention, by virtue of creating CDMA) was "the biggest platform in the history of mankind."
"We persevered and we built our business around developing an entire ecosystem of partners that can help commercialize CDMA...and we tried to take a unique approach with our technology," said Jacobs. "We decided to license it to virtually anyone who wanted to join in and compete in the wireless ecosystem. And I have to say that idea worked."

The platform Jacobs focused more on today was not for carriers but device manufacturers: Snapdragon, the 1.0 GHz-plus SoC that's capable of driving Linux-based netbooks, but is making huge inroads very quickly with smartphones. Surprisingly, Jacobs neglected to mention his company's manufacturing deal with Global Foundries, the chip maker spun off from AMD. Perhaps it happened too late to get it into the presentation, but it's no small deal: Qualcomm will now be able to produce dual-core Snapdragon chips at 1.5 GHz or higher, quite possibly before the end of this year.

Among the Snapdragon-based netbooks that could take full advantage of this deal is an Android netbook whose design looks not at all unlike the "slate" PC demonstrated by Microsoft CEO Steve Ballmer Wednesday evening. Although Android was the flavor of Linux for this device, Qualcomm also lets Lenovo do its own flavor of Linux for its Skylight smartbook, which premiered earlier this week.

Later during the keynote, Jacobs also gave attendees the first glimpse of an experimental color display technology called Mirasol, which he described as similar to the E Ink displays used in e-book readers like the Amazon Kindle.

"This technology's really cool, because the way that it makes colors is through interference, similar to the way that a butterfly's wings reflect colors," he described. "You've seen E Ink displays in devices like the Kindle, so this display technology does the same thing, except does it with full color and with full-motion video."