It sounds like a cleaning product and looks like butterfly wings. It's "mirasol" (yes, lowercase m, isn't that cute?) and it uses a reflective technology, called interferometric modulation (IMOD). The technology uses microelectromechanical systems (MEMS) technology to imitate the way butterfly wings shimmer -- a process called biomimetics, or imitating things found in nature.

That's a mouthful. The question is, is it an eyeful?

Mirasol is a technology under development by Qualcomm's MEMS Technologies division (so that's what the "MEMS" part means). The technology is being demonstrated at CES this week in e-book readers, and was demonstrated by Qualcomm CEO Dr. Paul Jacobs during his Friday afternoon keynote. It is supposed to be better over existing technologies in a couple of ways. First, it reportedly uses less power, because it only uses power if the display changes. Second, it's supposed to be faster than current technologies, which users have complained take up to two seconds to change a page.

According to Qualcomm, the technology has two conductive plates: one a thin film stack on a glass substrate, the other a reflective membrane suspended over the substrate. Normally it's clear. When a voltage is applied, the plates are pulled together by electrostatic attraction and the element turns black. And because the two plates are so close together, this can happen very fast.
Once it's changed…well, let's let Qualcomm explain it: "The bistability of mirasol displays comes from the inherent hysteresis derived from the technology's electro-mechanical properties -- the inherent imbalance between the linear restorative forces of the mechanical membrane and the non-linear forces of the applied electric field."

Intuitively obvious to the casual observer, so let's move on. 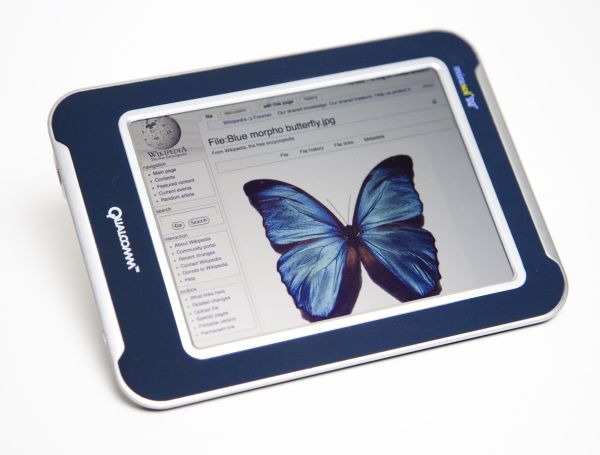 The display is full color with elements that reflect in red, green, and blue wavelengths, based on the difference in phase caused by reflection between the two plates. Ever blow into a plastic straw, then cut down the straw to change the note (check out this video to see what I'm talking about)? Mirasol does the same thing, except with light. "Black" is actually ultraviolet, which is not visible to most human eyes.

At least, that's the theory of how it works. But we know that in theory, there is no difference between theory and practice, but in practice there is -- so how does it work? Most people who saw it reported that it was pretty good, but one person said it seemed dim and not particularly colorful.

Some questions, too, for a technology that relies so heavily on vibration and electrostatics: How well is it going to work as a replacement for a book, which people cram into back pockets and take to the beach? Because it works with reflected light, reportedly it works better in a brightly lit environment than the competition, but will it work if you're wearing polarized sunglasses at the time? How well does it work in a dusty environment? A static-charged environment? A moist environment, such as people who like to read in the tub? How resilient is it to being dropped? How does it work for the colorblind? People who can see in the ultraviolet range?

And while they're at it addressing all these pressing issues, how soon could they change the name?