Apple should ban freebees from the iPad App Store

Apple shouldn't treat iPad like iPhone or iPod touch. The iPad App Store should be stocked full of premium content, meaning no freebees. It's the right way to help establish iPad as a premium product, as something special like the Macintosh. Unfortunately, Apple has little incentive to take this right approach benefiting its developers (because they make more money), customers (because they get better quality apps) and the iPad brand (because it comes be to viewed as a more premium product).

Apple's business is about selling hardware, using software and services as differentiators. Sure, Apple sold its 10 billionth song at iTunes yesterday, but the company's business isn't about selling content. The content is a means to selling more high-margin hardware. From that perspective, paid apps only marginally benefit Apple. Free is better, because there can be more applications, which is good for building out the App Store/iPhone OS device platform.

The question: Is the platform already big enough? I say, "Yes!" -- for a few reasons:

1) At the end of first fiscal quarter 2010, Apple had shipped 75 million iPhone OS-capable devices. The iPod touch may already be outselling iPhone, something often not factored into industry smartphone sales data. Apple's mobile platform is much bigger than iPhone.

2) Apple boasts more than 140,000 applications at its App Store, or about 7 times more than the Android Marketplace.

3) The majority of App Store applications -- 75 percent -- already are paid ones, according to analytics firm Distimo. By comparison, 57 percent of apps at Android Marketplace are free. Nokia's Ovi Store has highest percentage of paid apps -- 85 percent.

If three-quarters of the apps are paid ones already, why not 100 percent on iPad? Sure some people will balk, but, hell, they're the early adopters paying somewhere between $499 and $829 for iPad. What should they expect? It's a new product category for Apple and one where competitors have repeatedly failed. If Apple is going to try and breakthrough with tablets, why not freshen the approach: Make the product even more chic by making it more exclusive -- even at $499. Paid apps, and only paid apps, is one way to do it. 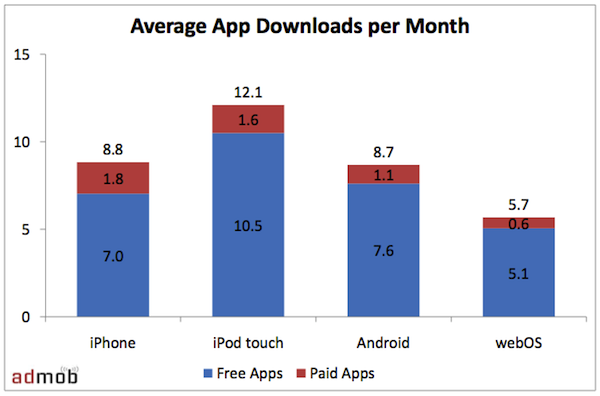 The approach also would better differentiate iPad from iPhone and iPod touch. The differences would then become something more than the applications, gaming and Web experience benefits coming from the larger screen size and processing power. Apple could pitch the iPad as the better App Store platform because the applications are better. They're not just better because of the hardware but investment developers make for something they get paid for.

Free isn't just about monetary value. It's about perceived value. People inherently value something more they paid for than what they get for free. That difference can be huge for developers and content providers trying to build brand loyalty. Free apps are throwaways. People are more likely to keep stuff they pay for. Brand loyalty is important for generating future applications sales, too.

The iPad is a unique opportunity for Apple to change the rules and take a paid-app only approach. Publishers will love it, especially content providers seeking to build audience as well as make money. If I were a news content provider, my iPad app wouldn't be free. There would be some fee attached to it. Better still: Apple should work with publishers on a news aggregation application. The iPad user spends, say, $120 a year and gets access to content from Economist, Financial Times, New York Times and Wall Street Journal -- or any other combination of five to 10 news sources. 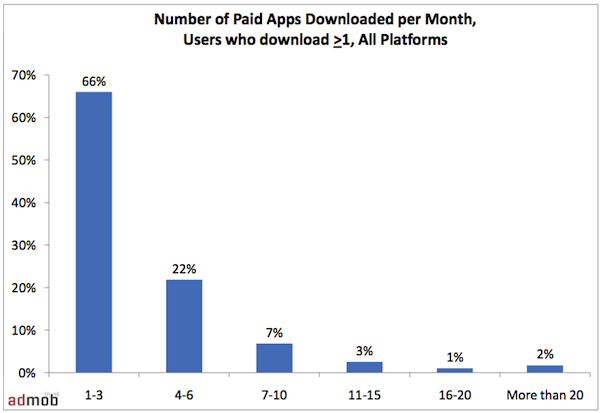 Apple's risk is low, from my perspective, although company execs might balk at any strategy that could hurt early iPad sales. The people who are going to buy have already decided to do so. According to a report released today by AdMob, 16 percent of iPhone users and 24 percent of iPod touch users plan to buy an iPad within six months.

But there is concern, for and against paid-only apps, revealed by the AdMob report. The good: 50 percent of iPhone users and 35 percent of iPod touch users buy at least one app a month, compared to 21 percent for Android. However, while the majority App Store applications are paid and Android Marketplace apps free, the monthly averages are similar: iPhone users download an average 8.8 apps a month compared to 8.7 for Android users. Among these apps, on iPhone 7 are free and 1.8 paid. For Android: 7.6 free and 1.1 paid. Considering the huge differences in number of paid-versus-free apps between the two stores, the similarities in customer download habits are surprising.

For Apple, this data cuts two ways, therefore. Firstly, there is risk of alienating customers used to free apps for iPhone and iPod touch. Secondly, if Apple does nothing, iPad will be yet another hardware device for distributing free applications. 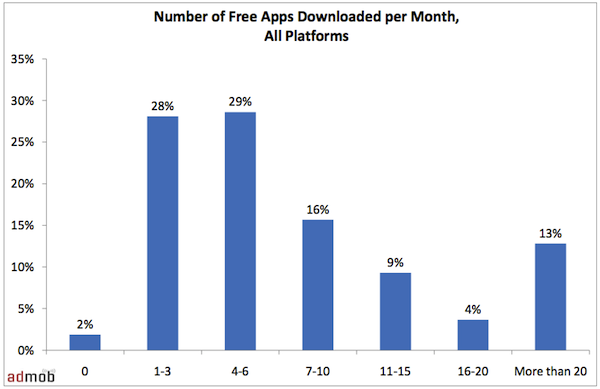 Developers need to make money; the value of free apps is often something else: brand exposure, upsell to paid apps, upsell to paid extras or advertising revenue, among other things. But I contend those same benefits could be available by charging at least 99 cents for applications. Apple should make 99 cents the new free on iPad.

Would you pay a buck for better mobile apps -- or is free the right price for you? Please respond in comments.