One of the more brilliant coups in the history of Web browsers, were it feasible, would be for Opera Software to seize Google's key argument -- that the best Web browser that European Windows users should switch to next month, is the fastest one -- and make it its own. Those users will get that opportunity starting March 1, when Microsoft's rollout of its browser "choice screen" through Windows Update, begins in earnest.

That's next Monday, however, and the acceleration of Opera's next-generation Web browser project from 10.2 Alpha 1 status in mid-December, to 10.5 "pre-alpha" status just 10 weeks ago to 10.5 Beta 2 status on Wednesday, is not making time go by any more slowly. As Betanews tests since December until now have revealed, test builds of Opera 10.5 provide an unbelievable 452% the performance of Opera's final 10.2 alpha daily build. With the ongoing replacement of Opera's JavaScript engine, Opera's engineers have made astonishing progress in a very short period of time.

But unless Opera truly plans to pawn off its rapidly advancing browser as a finished application in just a few days' time, like the crew of the Enterprise at the start of the first Star Trek movie, users switching from Internet Explorer 6 could find themselves in a wormhole. Betanews tests of the public build of 10.5 Beta 2 in Windows 7 show evidence of the kind of problems a tester encounters in an alpha or, at best, an early beta. Usually a build dubbed "Beta 2" looks and feels closer to a release candidate. 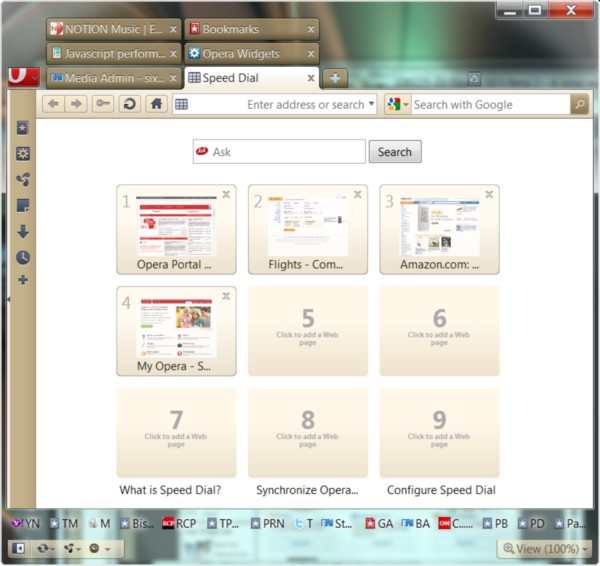 A heavily customized Opera 10.5 Beta 2 reveals little aesthetic 'splinters' that could be sanded down.

In fairness, I'll start by saying that Beta 2 was much more cooperative with us with regard to folding, stretching, and mutilating the browser frame, than Beta 1. I've always liked Opera's optional panels along the left side, for instance. The screenshot above shows what 10.5 looks like with the "Sand" skin applied (an attractive and unobtrusive tan shade), with "wrapping" turned on for the Tab bar (enabling multiple lines of tabs), with the left side panel selector engaged, and with the Personal bar (Opera's counterpart to Firefox's Bookmarks toolbar) moved to the bottom of the window.

Though the 10.5 skin is quite innovative, there's a number of unfinished features about it that I call "splinters" -- little problematic visual elements that detract from the aesthetic flow of the program:

Some users, especially longtime Opera fans, will say this is nitpicking. They're right. But that's what beta testing is. While experienced users have built up a tolerance for features that look wrong but aren't, novice users who see dovetails and unfinished borders will wonder if something's wrong -- more accurately, if they have done something wrong.

To drag or not to drag

In Betanews tests since Wednesday's release, we encountered a series of related, and perhaps obvious, functional anomalies. Opera has its own mouse movement interpreter, created so that users can make "mouse gestures" without the use of on-screen buttons or gadgets. The browser can interpret a special gesture as a command. But when trying to do ordinary things, like move imported bookmarks to a toolbar, we noticed several inconsistencies.

Historically, we've noted that applications that manage their own mouse movements may have problems with specific mouse drivers, so it may be notable here that our test system uses a standard Logitech mouse. It's important to note here: These behavioral problems persisted up until the point where Opera recognized a mouse movement we attempted with the right button held down as a gesture, and put up a dialog box asking us if we wanted to accept mouse gestures as commands. This happened a half-hour or so into our tests; we responded "Yes." At that point, the behaviors listed below vanished. When we disabled mouse gestures from the Settings > Preferences menu, the behavior returned. Thereafter, we notice the symptoms listed below from time to time when mouse gestures are turned off. However, none of these behaviors caused Opera to crash. 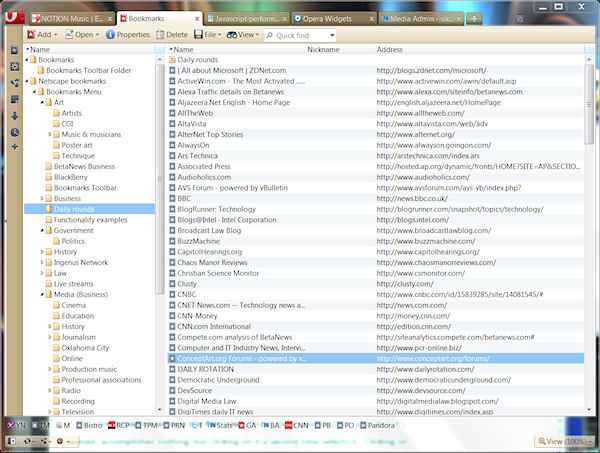 Opera 10.5 Beta 2 puts its bookmarks in a separate tab, like Chrome, rather than a separate window like Firefox.

In any event, we ran into several instances of awkward or unexpected behavior, including the following:

These are behavioral anomalies consistent with a program that tries to take care of Windows housekeeping for itself; we saw the same level of anomalies with the earlier builds of Google Chrome at the very beginning of its development cycle. But those early builds were classified as such. The problem with Opera 10.5 Beta 2 so far may not be slipshod development (in fact, judged on a timeline, it's actually coming along quite nicely). It's that its readiness for public release and consumption may be somewhat overestimated. These aren't problems that are going to fix themselves over the weekend.

Next: The potential hazards of subdividing the ecosystem...