How disastrous is Microsoft's hobbled mobile strategy? Today's Pew Internet report, "Understanding the Participatory News Consumer," offers some glimpse and even some hope. The report reveals that more Americans than ever rely on their cell phones for news and other information. Speaking personally, I find the Google News widget on my Nexus One to be indispensable.

Fifty-three percent of US adults "access the Internet wirelessly either through a laptop or a cell phone, BlackBerry or other handheld device," according to the report. Adults? What about measuring teen Internet usage -- and not just cell phones but WiFi devices like Apple's iPod touch? (More griping about Pew overlooking teens will come later in the post.)

"Pew Internet studies have shown that wireless Internet users are different from other online adults in important ways: they are 36 percent more likely than wired Internet users to access the Internet on a given day, and they engage in virtually all online activities (including email, social networking, and blogging) at higher rates than other internet users." 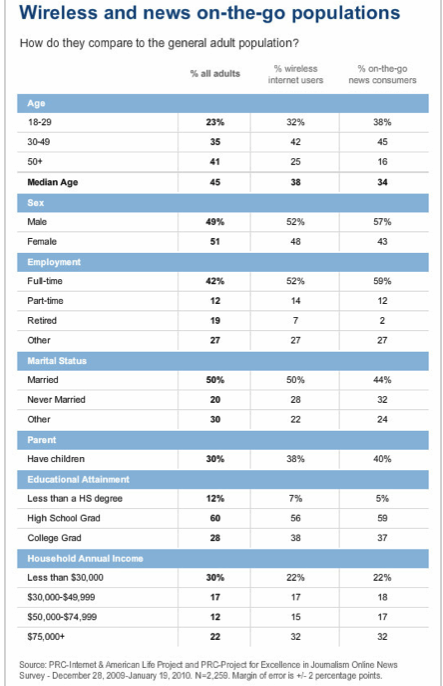 Analysts love to breakout data into demographic subgroups, and the Pew team is no exception, identifying "on-the-go-news consumers."

Not surprisingly, on-the-go news consumers maximize their cell phone use. They are 67 percent more likely than other cell phone users to text message, more than twice as likely to take pictures with their phones, and four times as likely to use their phones to instant message. They are also especially heavy Internet users -- 80 percent of this on-the-go group are online on a given day, compared with just 67 percent of other internet users -- and they engage in activities such as blogging (20 percent v. 11 percent ), using social networking sites (73 percent v. 48 percent), and using status update sites like Twitter (29 percent v. 14 percent) at significantly higher rates than other internet users.

As for what this all means for Microsoft's mobile strategy:

1) More than half of US consumers already get news and other real-time information wirelessly -- laptops more than cell phones. Microsoft should seek to improve news gathering on Windows laptops and transfer the behavior to Windows Phone 7 Series. Tactically, Internet Explorer 8 features like Accelerators and Web Slices are a starting point. New Outlook social networking features are another. 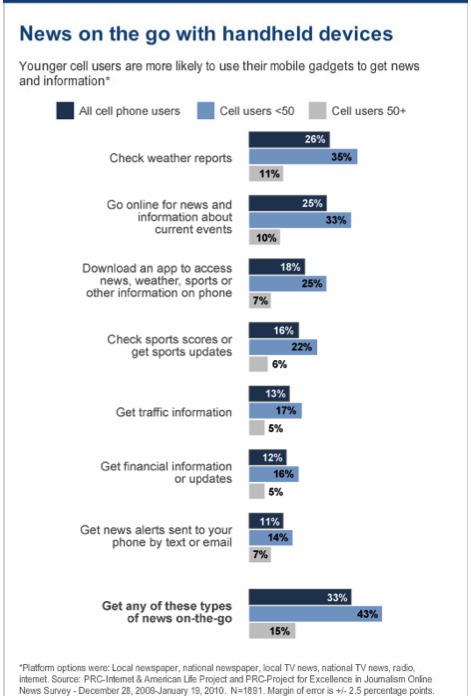 2) Microsoft should retool Bing for better news and information dissemination coordinated across the desktop and mobile device -- something Google already is doing with newer features like GPS location-based search and inclusion of news and weather widgets on Android 2.1 handsets. Based on other sections of the PEW report, Microsoft is right to make social networking such an important and pervasive feature in Windows Phone 7 Series.

3) "On-the-go-news consumers" are an ideal demographic for Microsoft. According to Pew Internet: "The typical on-the-go news consumer is a white male, age 34, who has graduated from college and is employed full-time." Many gadget companies target younger (ages 25-34), educated males for a reason. The same demographic going after online information may also be likely to buy bleeding-edge gear -- say, a new Windows Phone. 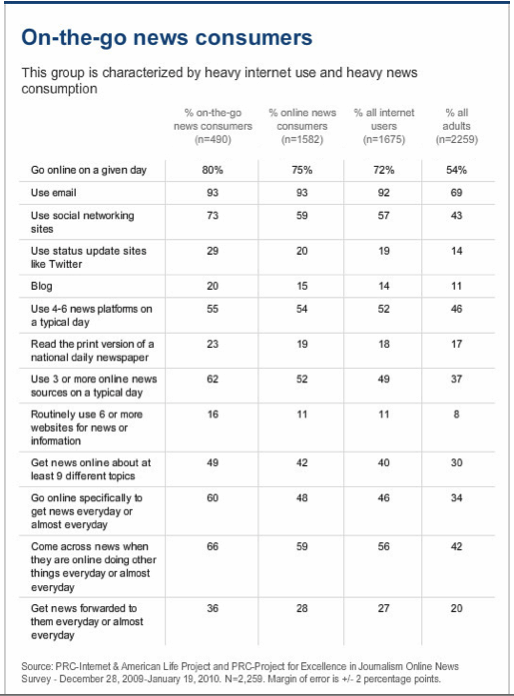 Microsoft should focus some -- perhaps much -- of its initial Windows Phone marketing on males 25-44, provided OS and applications capabilities are information and social sharing focused.