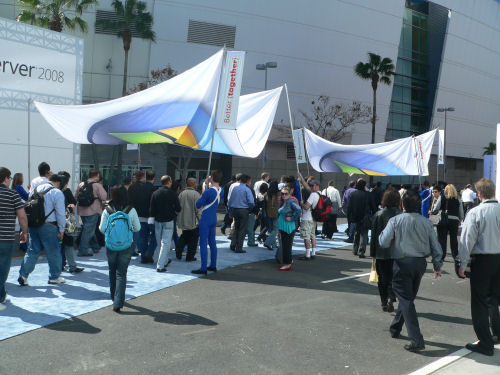 Two years ago, during a private premiere event entitled "Heroes Happen Here" held at the same Nokia Theater in Los Angeles where the Emmy Awards are now staged, and introduced by none other than Tom Brokaw, Microsoft rolled out a truckload of new server software product lines to help cement the company's new prominence in businesses and enterprises. One of the "heroes" that day, as Microsoft phrased it, was Essential Business Server, an effort to market a ready-from-the-get-go three- or four-server database and mail management package for businesses that have a few dozen employees, but may not yet be enterprises.

It was a solid idea. But today it was left to EBS' own product managers to announce on their team blog this morning that Microsoft has made a decision to cancel the product. The excuse they gave was especially disheartening, as it essentially caved in to the arguments naysayers used against EBS' viability from the beginning.

"Since the launch of EBS, several changes have occurred that drove our decision to streamline our server product portfolio," the team wrote. "First, midsize businesses are rapidly turning to technologies such as management, virtualization, and cloud computing as a means to cut costs, improve efficiency, and increase competitiveness. Those capabilities are already available through other offerings, including Windows Server 2008 R2, Microsoft System Center and the Microsoft Business Productivity Online Suite (BPOS)."

In other words, the functionality is already out there. But the original value proposition for EBS was this simple: Sure, it's out there, but mid-sized businesses aren't auto-equipped with the IT wizardry to know what to do with it, how to put it together. EBS offered users in the bigger-than-small, smaller-than-huge margin between the two big categories, one solid option for a manageable business network from day one.

Today, the team says, that option is moving toward the cloud. While their explanation implies that the customers are moving there, practical experience tells us that the marketers are moving there in hopes of taking their customers with them. Microsoft is busy marketing hosted storage options for Exchange and now SQL databases, which at one level directly compete with EBS.

Essential Business Server was the brainchild of one of Microsoft's smartest people, a technically-minded manager (something you don't see very often anywhere) named Steven VanRoekel. He was the one who sold Microsoft on the idea, and as he told Betanews in 2008, he led the design of the product based on the advice compiled by a 25-person advisory board. That board spoke directly with existing SBS and other Microsoft customers, determined what it was they used and what kinds of problems they had administering it, and developed a packaged option around solving their concerns.

The original plan, VanRoekel told us, was to integrate cloud services into EBS as they became available, rather than allow both product lines to fork.
Smart people get discovered, however, and VanRoekel moved up in the world. Specifically, he moved to Washington, and is now Managing Director of the Federal Communications Commission, reporting directly to Chairman Julius Genachowski. His departure from Microsoft left a leadership void for his product that would never be filled.

Unlike an ordinary retail product, EBS isn't just something a manufacturer can cancel and expect customers to scatter like herded sheep to their replacement barn. As a server product, customers have expected EBS to be upgraded periodically with features that help it retain the value they've already invested (and are continuing to invest) in it. Toward that end, Microsoft has posted an offer on the EBS Web site, inviting existing EBS customers the opportunity to transition for free to the individual component products of EBS.

But according to the EBS Web site's small print, that's not exactly an upgrade. EBS never actually made the transition to Windows Server 2008 R2 (once again, see "VanRoekel," "move to FCC"). So the free option will only allow EBS customers to move their three or four servers to the 2008 Standard Edition of Windows Server 2008 -- an edition which lacks the improvements made to the system kernel for the Windows 7 era.

Microsoft Exchange Server 2007 and Microsoft System Center Essentials 2007 (the administrative package) are also being offered for free. But those aren't the latest editions either: The 2010 version of Exchange Server is available now, and the Release Candidate of SCE 2010 is currently being publicly tested. Upgrading to these latest editions for mid-level businesses will mean entering into negotiations for volume licensing, for which EBS was designed to be an alternative.

The Small Business Server project will continue, and we're told there remains good reason to keep our eye on the evolution of that product.